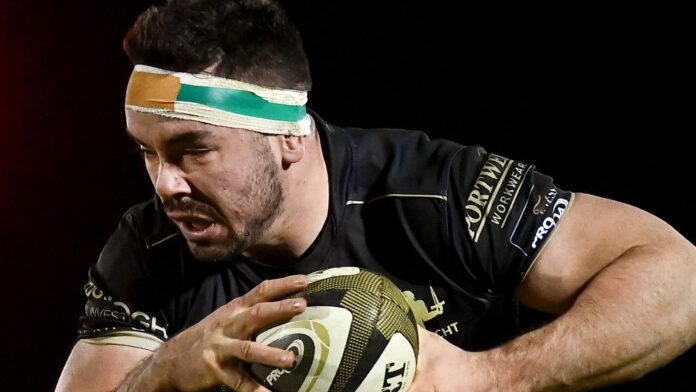 Boyle ran in three of Connacht’s five tries, with Peter Sullivan and Alex Wootton crossing to secure a 31-14 bonus-point win for the hosts in the Conference B clash in Galway

Paul Boyle celebrated his first time captaining Connacht with a hat-trick of tries in their 31-14 Guinness PRO14 win over Benetton at the Sportsground.

Backed by a very strong wind, Connacht led 24-7 at half time thanks to No 8 Boyle’s brace and further scores from wingers Peter Sullivan and Alex Wootton.

FT| We make it consecutive @PRO14Official wins after a five try 31-14 win over @BenettonRugby.

It was a special night for Paul Boyle, who not only captained Connacht for the first time but also scored a hattrick of tries.

With their bonus point in the bag, Boyle sealed his hat-trick in the 53rd minute as the hosts moved into second place in Conference B. Benetton had a late consolation score from captain Dewaldt Duvenage.

There were some bright moments early on for Benetton, suitably attired in an eye-catching all-yellow kit, but their scrum quickly started leaking penalties.

Caolin Blade was held up before Boyle crashed over from a five-metre scrum for his 13th-minute opener, converted by Conor Fitzgerald.

Backs and forwards then combined in a 23rd-minute lineout drive to propel Sullivan over the line for his first try for the Irish province.

The Italians closed the deficit to five points soon after, Ratuva Tavuyara reacting impressively to a partially-blocked kick before Marco Barbini carried forcefully and Alongi duly drove over from a few metres out.

The try, converted by Ian Keatley, stood in spite of a post-score lunge by Benvenuti on a prone Gavin Thornbury. The TMO review, however, highlighted him leading with his shoulder.

The Benetton centre’s yellow card was hugely costly for the visitors, as Connacht went wide to the left and Sullivan’s well-timed pass sent Wootton over on the half-hour mark.

Fly-half Fitzgerald was able to convert Boyle’s second score of the night, close to the interval. A blindside gap appeared from a scrum and the deceptively-quick Connacht skipper evaded Callum Braley to establish a 17-point advantage.

Despite struggling initially with their discipline on the restart, Connacht almost scored from a quick-witted counter attack, but TMO Joy Neville ruled that Eoghan Masterson was held up.

Nonetheless, from the resulting scrum, Connacht wore down the Benetton defence and player-of-the-match Boyle, ably supported by two team-mates, powered over from close range to make it 31-7.

A promising Fitzgerald break was the highlight of a final quarter that was scoreless until his opposite number Duvenage went over from a quickly-taken 77th-minute penalty and converted.