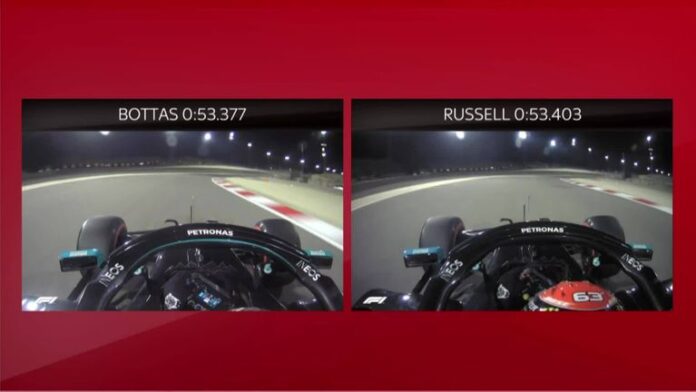 It was Bottas’ fifth pole of the season, and the quickest in F1 history at 53.377s, but he only claimed it by two hundredths of a second from Russell as the 22-year-old Englishman, who is replacing Lewis Hamilton this weekend, put in a remarkable performance on his Mercedes qualifying debut.

Russell got so close to Bottas on his final lap, as did Max Verstappen – although Red Bull’s star missed out on his first F1 2020 pole by just 0.056.

It was a pulsating battle between the top three throughout the qualifying hour on Bahrain’s ‘oval’ layout, one which Russell should be proud to have been a part of – let alone almost win – having only been drafted in by Mercedes from Williams on Wednesday.

“Really pleased,” said Russell, who had never reached Q3 in F1 before Saturday. “We got it all together in the final lap. Obviously gutted to miss out on pole by 20 milliseconds but if you told me last week I’d be qualifying P2 on the grid I wouldn’t have believed you.”

He added: “Valtteri has pushed Lewis a huge amount in qualifying over the years. I think statistically there has only been a tenth between them and we all know how great Lewis is.

“Just to be right behind Valtteri, coming in last minute with two days of prep, I’m pleased. Let’s see what we can do tomorrow.”

Charles Leclerc secured fourth for Ferrari with a superb lap at the start of Q3 – eventually just two-tenths off Bottas – making the most of Alex Albon missing the top-10 shootout after being eliminated in Q2 in 12th for Red Bull.

Sergio Perez, aiming for Albon’s Red Bull seat next year, impressed again in fifth for Racing Point, ahead of AlphaTauri’s Daniel Kvyat, who secured his best F1 grid slot in 18 months. One of many F1 surprises.