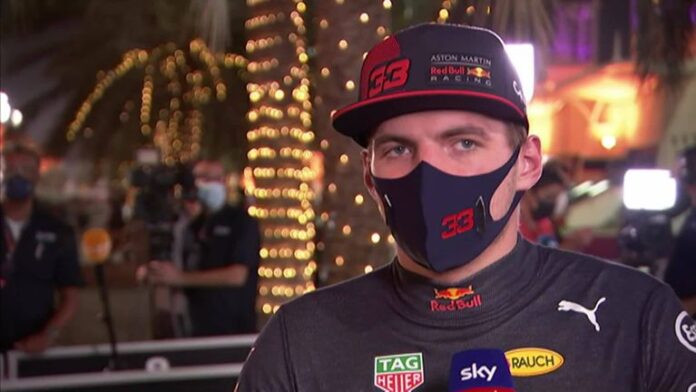 Max Verstappen has been praised by George Russell after once again taking the fight to Mercedes on his own in an F1 2020 qualifying session, with the Englishman insisting the “exceptional” Red Bull driver “deserves more” pole positions.

Verstappen, however, who was just 0.053s off Sakhir GP pole position but still finished behind both Silver Arrows, insists he was just happy to get close to pole-sitter Valtteri Bottas and Russell, Lewis Hamilton’s impressive stand-in.

Third place in qualifying has been common for Verstappen this season with Mercedes much faster – particularly over one lap – than Red Bull, and indeed Saturday was the 10th time in 16 sessions he has finished in that position.

But Verstappen, without a pole since late 2019, got much closer to Mercedes in Bahrain’s shootout than previously this year, edged out by half a tenth. That led to Russell, who was a couple of hundredths faster, heaping praise on the Dutchman.

“Max is just absolutely on it,” Russell, who shone on his Mercedes qualifying debut, told Sky F1. “Huge, huge credit to him.

“He deserves some more pole positions because the way he’s driving is exceptional. So he’s going to be pushing me and Valtteri [in the race].”

Verstappen has just two Formula 1 poles – compared to nine wins – despite being one of the sport’s most ferociously fast and consistent drivers.

The 23-year-old said he was happy with his Saturday after getting so close to that elusive 2020 pole.

“I never thought I could really fight for pole but of course I’m happy we were that close,” said Verstappen. “But also you have to look at Valtteri, he had no tow on his final run and of course that costs you a bit.

“I think the gap realistically is a little bit bigger, but overall for us on a track like this it’s not a bad result.”

Red Bull were faster than Mercedes through the race-run simulations in Friday practice, but Verstappen – who will head the second row in Sunday’s Sakhir GP – added: “We’ve had a few Fridays when it looked pretty good but then on Sunday it seemed that Mercedes were maybe hiding a bit and then will step it up.

“We have to see tomorrow how competitive we are, but I have good hope that it can be an exciting race.”