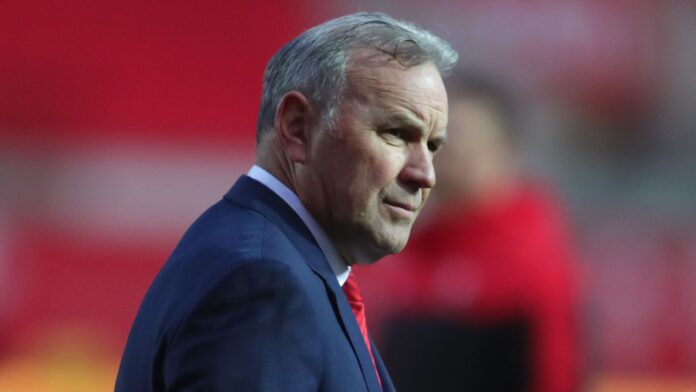 Despite being made to work for the 38-18 win over Italy in Llanelli, Wales head coach Wayne Pivac believes his side have made progress; “If we go pre-lockdown you would say we’re not too far off,” the New Zealander said

Wayne Pivac insists Wales will be Six Nations contenders in 2021 despite an underwhelming start to his reign.

Pivac managed only three Test wins in 2020, with his first year in charge culminating in Saturday’s 38-18 Autumn Nations Cup win over Italy in Llanelli.

Italy, twice, and Georgia are the only sides Wales have beaten this year, but New Zealander Pivac believes he can win over the doubters in his adopted homeland by launching a Six Nations title challenge in 2021.

“If we go pre-lockdown you would say we’re not too far off, the French game at home and the game with England,” Pivac said.

“Obviously we selected a different type of squad for this autumn series, which has been discussed quite a bit.

“But combining the two squads and our learnings, I’d like to think we’ll have a good crack at [the 2021 Six Nations]. No doubt others will be thinking England, France and Ireland.”

I’d like to think we’ll have a good crack at [the 2021 Six Nations]. No doubt others will be thinking England, France and Ireland.

Wales had not lost to Italy since 2007 and won 14 consecutive games against the Azzurri before their trip to Parc y Scarlets, but Wales were in danger of being embarrassed when Italy took an 18-17 lead at the start of the second half through Johan Meyer.

Pivac’s side, however, regrouped and in the end ran in five tries. There were first Test scores for Kieran Hardy and Sam Parry, while Gareth Davies, George North and Justin Tipuric crossed in the second half.

“We asked a few questions of a few players and we got some answers,” Pivac said. “It was what we wanted to get out of the game, as well as the result clearly.

“We weren’t happy conceding 18 points and there were too many penalties before half-time.

“Going down to 14 men [when Josh Adams was yellow carded just before half-time] wasn’t in the script, but once we got our composure back and were back to 15 we finished the game quite strongly.

Having lost to England and Ireland, Wales finished fifth in the Autumn Nations Cup, but Pivac insisted it was a valuable campaign.

He was particularly pleased to have given 11 players their debuts over the course of the tournament and believes their performances have given him and his staff plenty of options to consider.

“We’ll do a ranking by position, and we’re in a better place in our depth and rankings than we were a couple of months ago.”

Italy captain Luca Bigi felt Wales were allowed to dominate the crucial final quarter after the Azzurri had taken a one-point lead.

“We didn’t get a proper reaction when we had momentum,” Bigi said. “It was the same against Scotland and we need to be more effective in the second half of games.

“But we’ve seen some new faces in the Six Nations and this competition. We are evolving and improving, and we are committed to this long-term project.”