Home Sport Hull one back as three share Texas lead 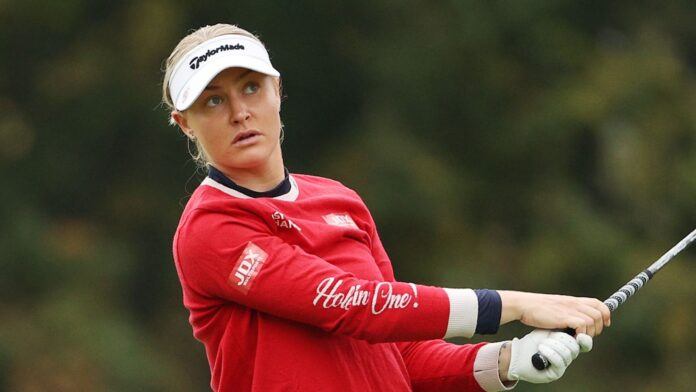 Charley Hull just one shot off the lead after 54 holes of the LPGA Volunteers of America Classic as she looks to emulate Georgia Hall and Mel Reid in winning on the LPGA Tour this season.

Charley Hull stayed in contention to become the third English winner on the LPGA Tour this season after an excellent third day at the LPGA Volunteers of America Classic.

Hull made light of the conditions which caused an early two-hour delay for frost, carding a 68 which lifted her to within one shot of the lead held jointly by So Yeon Ryu, Inbee Park and Yealimi Noh.

Teenager Noh was two clear of the field after 53 holes, but her drive up the last caught a bunker and her ambitious second cannoned into the lip and landed back in the sand.

She would go on to miss a short putt for bogey at close with a six that dropped her into a share of the lead with South Korean pair Ryu and Park.

Ryu flew up the leaderboard with five birdies in the first eight holes, although the world No 15 added only one more on the back nine as she set the clubhouse target at four under.

She was later joined by seven-time major champion Park, who capped an outward 32 with three birdies in four holes before she gave a shot back at 11 and parred home for a 69.

Noh overcame a mid-round stutter with birdies at 13 and 17 putting a little daylight between her and the pack, but her mistake at the last saw her relinquish the outright lead, with Hull just one behind after she matched Thursday’s 68.

Hull kept a bogey off her three-birdie card having worked hard on her game on the range following her disappointing three-over 74 in the second round.

“I hit balls on the range last night and did some putting, I just didn’t feel like I was quite in the groove, but I figured it out.” said Hull, who is determined to emulate Georgia Hall and Mel Reid in lifting LPGA silverware this season.

“I’ll just go out tomorrow with the same attitude as today, hit my three-quarter swings and taking some pins on. There are some good long-iron shots and par-threes and I prefer it like that. I’m a ball-striking kind of person so I enjoy when courses are like this.”

Hull shares fourth with American duo Jessica Korda and Angela Stanford, as well as Jin Young Ko as the world No 1 enjoyed another solid day in only her second LPGA Tour appearance since returning from lockdown.