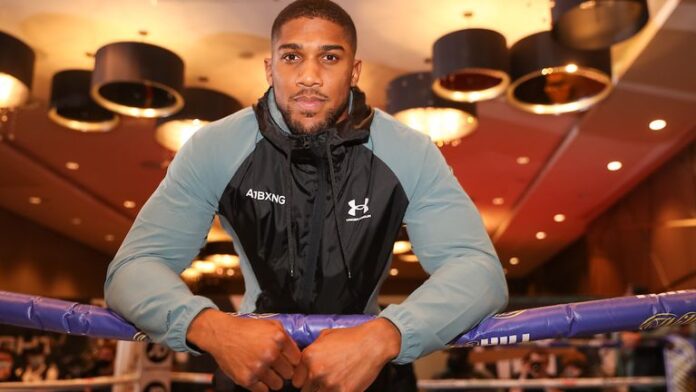 The greatest fight in a generation – Anthony Joshua vs Tyson Fury – looms if AJ can dispatch the experienced and rugged Kubrat Pulev tonight; Joshua has a chance to throw down the gauntlet to Fury; AJ vs Pulev for the world heavyweight title is live on Sky Sports Box Office

Anthony Joshua has resisted the urge to say you-know-who’s name all week but there can be no escaping the looming spectre of Tyson Fury – tonight’s world heavyweight championship fight must be a signal from Joshua to Fury about where true supremacy lies.

Joshua puts his IBF, WBA and WBO heavyweight championships at stake against Kubrat Pulev on Saturday night, live on Sky Sports Box Office, knowing that victory alone is not enough to send an emphatic message to Fury.

Joshua must destroy Pulev, make a cruel example of him, to truly state his intentions for WBC champion Fury ahead of their proposed fight next year which would crown the division’s undisputed ruler and become the most compelling boxing match for a generation

This is Joshua’s first fight since the pendulum of public opinion, boxing’s most valuable currency, swung partially in Fury’s favour.

The dismantling of the previously-unbeaten Deontay Wilder was an alarming stamp of authority from Fury – Joshua knows that the gauntlet has been thrown down and the signs suggest that he is ready to respond.

This is a different Joshua to the one of 2019 who overlooked Andy Ruiz Jr towards an undisputed title fight, then spent the rest of the year amending that error. The training, the sparring, the psychology, the mentality has long been overhauled and today he is a newly focused force.

The skirmish with Pulev at the weigh-in was something Joshua needed to spark the fire in his belly – never is he more dangerous than when wound up.

It is always a good sign when his ear-to-ear smile disappears.

“People want to see the undisputed championship so I have to fight tough guys like Pulev along the way to get myself in position,” Joshua said without mentioning Fury’s name again.

A dismantling of Pulev tonight would add another crucial chapter to the heavyweight tapestry that is unfolding in this era and would be a savage riposte to claims that Fury is the division’s king.

The common denominator between Joshua and Fury is Wladimir Klitschko (each Brit handed him a different kind of defeat to conclude his iconic career) and the great Ukrainian’s influence has been everywhere this week.

From the way Joshua wraps his hands, to demanding secrecy around his workouts, to sparring unusually all week, the world heavyweight champion has learned to control the pandemonium around him from Klitschko.

Klitschko is the only man to beat Pulev and spoke to Joshua for an hour on Wednesday.

“There is inside-information,” Joshua warned. “But we don’t focus too much on it. He advises me about myself.”

But Klitschko was eventually left bewildered when Fury bamboozled him – Joshua’s exercises in controlling his surroundings will have taken into account his mentor’s shortcomings too.

Joshua revealed to Sky Sports this week the existence of a scrap of paper that prophesised his future in-ring targets: “In 2013 my uncle gave me a list of heavyweights and [wrote next to their names]: ‘Chisora, Klitschko…’

“Pulev was on that list. It was a matter of when.”

So too, surely, was Fury and a theme of this week has been to debate and contrast their respective accomplishments.

Fury, of course, is unbeaten and holds esteemed wins over Klitschko and Wilder but his long road began in 2008, three-and-a-half years before Joshua went to the Olympics, never mind turned pro.

Promoter Eddie Hearn reels off the list of Joshua’s consecutive opponents and there is merit to that argument – there has not been a single soft touch in five years, a row of conquests including Dillian Whyte, Alexander Povetkin and Joseph Parker before you even consider his two grandest results against Klitschko and Ruiz Jr.

That is an argument for Sunday morning. For now, Pulev is a threat that Joshua has taken seriously to the extent where the intensity spilled over at Friday’s weigh-in.

The Bulgarian has lost just once in 29 fights and has since beaten Derek Chisora and Hughie Fury.

Pulev and his brother were bred to fight by their father, a heavyweight boxer himself. Pulev promised his father, who has passed away, that he would one day become a champion and he is emboldened by that vow tonight.

Three years ago, Joshua was scheduled to fight the same opponent, but Pulev withdrew injured.

This is a crucial detail to understand Pulev’s ambition – rather than conceal an injury, knowing it wasn’t possible to win while collecting a career-high payday in 2017 he nobly opted to withdraw, trusting his chance would come again.

He now arrives as a world heavyweight title challenger for the final time in his life, and Joshua has previously estimated this opportunity adds 25 percent onto a boxer’s ferocity.

Such bravery will leave Pulev if the first couple of rounds are a horrible introduction into what it’s like to get onto Joshua’s wrong side – “I must break his soul,” the champion has said, so expect him to inflict a slow, torturous beating until his rival can no longer defend himself.

That is what the world needs to see from Joshua tonight.

It is what Fury needs to see from him, too.

Watch Joshua vs Pulev on Saturday, live on Sky Sports Box Office, from 6pm. Book it via your Sky remote or book it online here. Even if you aren’t a Sky TV subscriber, you can book and watch it here.