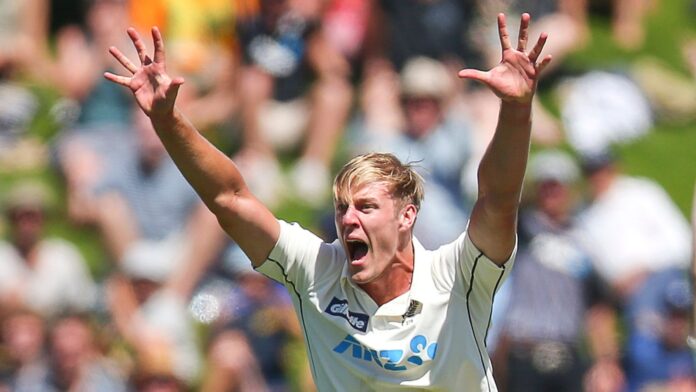 Seamer Kyle Jamieson claimed an international-best five-wicket haul as New Zealand blew away the West Indies batting to seize control of the second Test on day two at Wellington.

Jamieson, playing in only his fourth Test, returned figures of 5-34 – including two wickets in two balls – as the tourists crumbled to 124-8 in response to the Black Caps’ sizeable first-innings total of 460.

Henry Nicholls posted his highest Test score of 174 for the home side – as did tail-ender Neil Wagner, who blasted an unbeaten 66 from only 42 balls before Jamieson and Tim Southee pressed home New Zealand’s advantage.

Resuming on 294-6 overnight, the Black Caps maintained their momentum during the first session as Jamieson (20) and Southee (11) kept Nicholls company before both eventually fell to Alzarri Joseph (3-109).

However, West Indies’ policy of bowling short at Wagner backfired, with the No 10 unveiling a series of powerful pulls and hooks as he and Nicholls added 95 for the ninth wicket from only 73 deliveries.

West Indies struggled immediately against the Black Caps’ seam attack, with Southee having Kraigg Brathwaite caught at first slip for a duck before Darren Bravo (7) speared a return catch to the bowler.

Southee also softened up John Campbell (14) with a vicious, lifting delivery that dug into his midriff, paving the way for Jamieson to take the opener’s wicket with his third ball – and the fourth, a yorker, proved too good for Chase.

That left West Indies’ top order in tatters at 29-4, although Jermaine Blackwood (69) offered spirited resistance as he and Shamarh Brooks (14) put together a fifth-wicket partnership of 68.

Jamieson returned to halt that fightback by bowling Brooks and, once Southee had prised out Blackwood with another rising delivery that he could only fend into the hands of Tom Latham, New Zealand were on a roll again.

Visiting skipper Jason Holder (9) miscued Jamieson to mid-on and the bowler completed his five-for – the second of his fledgling Test career – just three balls later when Joseph edged him behind.