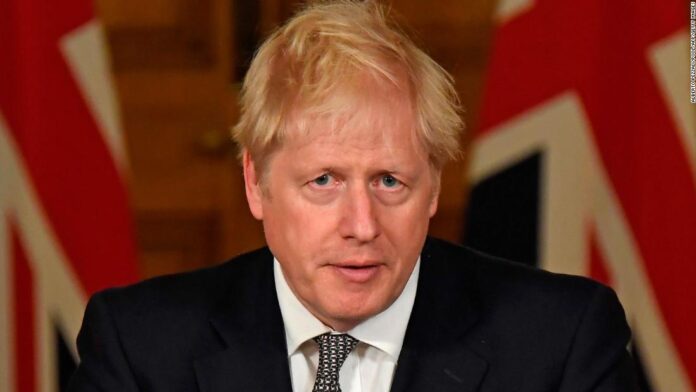 After three years of political deadlock had failed to deliver on the UK’s vote to leave the European Union, the figurehead of Brexit won a landslide general election, giving him a parliamentary majority large enough to reshape the nation.
Brexit’s true believers celebrated: Their messiah would now be able to finish the job he had started in 2016.
Johnson had seemingly unified a bitterly divided Conservative party — whose days in government during Theresa May’s premiership had appeared numbered just months before. The good will Johnson’s lawmakers held for their leader was palpable.
A scant 12 months later, much of that goodwill has vanished — despite his party continuing to perform well in opinion polls compared to the opposition Labour Party.
The Brexiteers who celebrated Johnson’s victory now fear a sell-out at the last minute, as the deadline for a deal with the EU could come as soon as this Sunday.
And while Johnson’s handling of the Covid-19 pandemic has been heavily criticized as insufficient and dangerous by his opponents, many in the UK Prime Minister’s own party believe he has gone too far, seeing his readiness to batter the economy with lockdowns, restrictions and taxpayer-funded bailouts as a betrayal of Conservative values.
For the purposes of this article, CNN spoke with multiple figures within the Conservative party, from Members of Parliament to former advisers and campaigners. Most agreed to speak on the condition of anonymity, in order that they could be candid about what they perceive as the failures of their leader.
More than 20 Conservative sources across the party believe a significant catalyst for the gulf in trust between the PM and his party was the decision to hire Dominic Cummings — the controversial brains behind the Brexit campaign led by Johnson — to serve as his most senior adviser. They believed Cummings was a ticking timebomb whose unpredictability would inevitably land the PM in trouble. And although Cummings has resigned from his post and will no longer work for Johnson in the new year, many fear the damage has been done.
Cummings was not a member of the party and, during the Brexit campaign, had made his contempt for Conservatives very clear.
Veteran MPs bit their tongues as Cummings’ campaigning racked up victories in both the Brexit referendum and the 2019 general election, but when Johnson returned to Downing Street with a majority, his party’s rank and file members believed they were being treated as an afterthought by a leader who felt invincible.
“There was a real feeling among MPs that they no longer mattered,” says Tim Bale, professor of politics at Queen Mary, University of London. “The decisions were being made by a small group of people in Downing Street and they were simply expected to shut up, fall in line and defend the government no matter what.”
This created problems when controversy began to swirl around Cummings. Over the course of 2020, the PM’s top aide made headlines on two significant occasions.
First came the revelation that he had personally hired someone to work in Downing Street who had supported eugenics and made racist remarks.
Then, even as millions of Britons up and down the country were spending months largely confined to their homes because of the coronavirus pandemic, Cummings broke lockdown regulations to drive his wife and son from London to the northeast of England, shortly after an outbreak of Covid-19 in Downing Street.
The story rumbled on for months and polling repeatedly revealed that the public thought Johnson had made a mistake in not sacking Cummings, and muddied the government’s coronavirus message. Even now, it is a stain on the PM’s reputation.
“We were being asked to defend a man who most of us had never met, and whose behavior had led to us getting hundreds of letters from angry constituents,” said one Conservative MP who is on the government payroll.
Another senior Conservative MP said they were “being pressured to repeat lines fed to us by Downing Street, without so much as a word of thanks or contrition from Dominic.”
Cummings defended his decision to leave London during the lockdown at a press conference held in the back garden of Downing Street, saying he believed it was the best way to provide childcare for his young son.
If defending the behavior of Cummings wasn’t bad enough, dozens of MPs told CNN that on more than one occasion during 2020 they were instructed to explain unpopular government policies, only for Downing Street to U-turn moments later.
“You can almost feel that the trust has gone,” said the senior Conservative MP. “Colleagues in parliament are increasingly hesitant to make any public statement supporting the government, because we have no idea how long a policy will stick.”
The worst example of this came when popular Manchester United footballer Marcus Rashford ​pleaded with the government to provide free school meals for the poorest children over the holiday period. After days insisting their initial plan not to offer food vouchers was correct, Downing Street eventually gave in to public pressure.
“There are only so many times you can be expected to defend the indefensible, only to have the government pull the rug out from under you,” says Bale.

The numerous U-turns of 2020 have mostly related to Johnson’s handling of the pandemic, which many Conservatives believe has been too stringent and unnecessarily hard.
“All that good will he had for delivering our Brexit dream is being overwritten by the fact he’s not behaving like a Conservative,” explained a veteran Tory on the right of the party.
“As far as many of us can see, the government is taking away the liberties and freedom of citizens without producing any evidence as to why,” they said. “I am afraid he does appear to have abandoned the principles we believed he once held.”
The criticism that Johnson has taken too many of these decisions without consulting his MPs comes up again and again.
“In terms of getting us involved in decision making, he has been poor, and it has led to the Balkanization of the party,” says the MP on the government’s payroll.
Numerous Conservatives suggest that a good example of how affection for Johnson has diminished over time can be seen in how his MPs talk to him in parliament about the pandemic. When Johnson had the virus himself, the empathy was enormous. Now, they question his policies and their efficacy with little regard for the fact that the disease nearly killed him.
For all Johnson’s troubles in 2020, his worst days could be yet to come.
Brexit is yet to reach its conclusion. Both London and Brussels say a decision must be made in the next few days and are talking up the prospect of no deal being agreed. Despite this, many hardliners are braced for what they consider a sell-out from the man who once embodied Brexit, in order to strike a trade deal with the EU.
“When Boris was outside of government, he wound up the Brexiteers by rejecting [former PM Theresa] May’s deal and demanding a harder Brexit. In some respect, he’s simply reaping what he sowed,” says a senior Conservative adviser. “Many of the hardest Brexiteers really believe he is going to water it all down.”
Another senior Brexiteer explains that “most hardliners are unlikely to be happy with any deal that has even a sliver of EU involvement in Britain’s domestic law,” adding that their concern is “if that sliver could turn into something that drags us back towards Brussels.”
If Johnson really does want a deal, this is going to be a problem. “The PM and his party have egged one another on in this fantasy world for years now, when it was always blindingly obvious that a deal would require compromises,” says Bale.
The senior Conservative MP believes many of their colleagues were so strident in their belief that any concession to Brussels was a surrender that “it’s now virtually impossible for them to back a compromise without looking very embarrassed.”
While no one seriously believes that parliament would vote down a deal at this stage, the potential for a sizeable rebellion among Johnson’s former supporters will be wounding. Worse, it could be the start of a trend for future revolts.
One year on from their triumph, the Conservatives’ champagne has well and truly lost its fizz.
Salma Shah, a former government adviser, says this was always a potential problem for Johnson: “Every leader struggles with their backbenchers, regardless of the size of the majority. They didn’t all immediately back Boris for PM. To some extent, they lent their support to him in order to have Brexit delivered.”
Johnson spent most of 2020 making decisions that seemed tailor-made to irritate many of the Conservatives who backed him to get the UK put of the EU. If the year ends with a perceived betrayal on Brexit and continued curbs on liberties, Johnson could find that minor grumbles grow into outright mutiny. And he may find himself increasingly isolated at a crucial moment in British history.