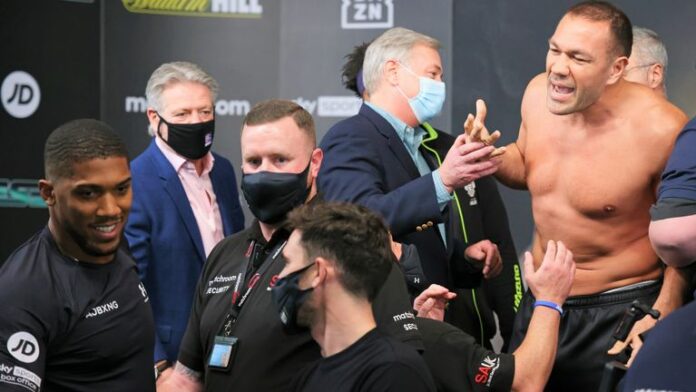 Anthony Joshua defends his world heavyweight titles against Kubrat Pulev in a spectacular homecoming clash – and The Panel have made their predictions.

Will Joshua defend his WBA, IBF and WBO belts with an explosive victory, or can IBF mandatory challenger Pulev seriously threaten his future plans?

Early on, AJ is going to take his time. For two or three rounds, he is going to find his range, get comfortable and get confident.

I want him to be back to his old self when he’s tenacious, aggressive and a bit spiteful.

Then when he starts to land in the mid to late rounds, he will step in and sit down on his punches, so Pulev really feels them. I want to see him really apply the pressure with pace and power. I think he can force the stoppage and get him out of there in the eighth or ninth round.

I do not think this is going the distance. AJ is going to stick it on him. I want him to be back to his old self when he is tenacious, aggressive and a bit spiteful.

Pulev will give it everything for the first four rounds. He will stalk Joshua in the opening round, try to time his speed, see what he has got. From the second round, Pulev will step it up, and try to apply some pressure because he will also know that the longer the fight goes, the better it suits him.

Pulev’s jab is unbelievably tough and strong, he wobbled Klitschko with a simple jab.

But Joshua will make sure he does not make another big mistake after his defeat to Andy Ruiz Jr. He has learned, come back from that, and I expect Joshua to win by stoppage in the eighth or ninth round.

With someone like Pulev, who has only been beaten once by Wladimir Klitschko, you have got to give him that level of respect, because he is a solid, durable guy and he is a good fighter.

The most intense Joshua weigh-in yet? @EddieHearn thinks so. 🔥

I think Joshua will establish his jab and will look to rack up some rounds, but if the knockout comes, it comes. I do not think he will go in there looking for the knockout. He will not try and force it, but when you go in there and jab and box, that is when it comes.

Joshua carries real power, if he goes about the job properly and boxes well, there is a good chance he will catch him and he could knock him out. It is not an absolute given. I think he definitely wins, but whether he knocks him out, I am not sure.

If it went to points, you would naturally assume that AJ would win it. It is difficult to say. AJ would be a slight favourite for me, going into the fight, but Pulev is definitely not to be overlooked.

That’s the type of the fight this is. It can go any way at any time.

Anything can happen and Pulev has trained hard, he has got that self-belief. Is he going to take it to AJ, then make a mistake and AJ clip him early? That is the type of fight this is. It can go any way at any time.

I think Joshua is going to stop him before halfway in the fight. Joshua is bound to have a bit of a look, but I think if he imposes himself on the fight, and does look to be aggressive, he can do it without taking too many risks and knock him out.

Pulev has been a very good fighter. He’s got strong fundamentals, he has got a decent jab and was good against Derek Chisora. I was ringside for that fight. Chisora could not get past his jab.

If they fence for 12 rounds, then he could even win, but that is not going to happen. It might for a couple of rounds and he will be able to handle that, but as soon as Joshua ups the pace, and steps in a little bit more and lets his hands go then Pulev will not be able to handle it. There is no way he can.

I am expecting something spectacular from Joshua. I just believe that he will have speed of hand, speed of foot and he will break through the guard of Pulev.

Wladimir Klitschko showed the blueprint on how to beat Pulev, back in 2014. He was nailing Pulev with left hooks and straight right hands through the middle. Defensively, Pulev is not going to be tight enough and Joshua will tag him and we could see the fight over inside six rounds.

Watch Joshua vs Pulev on Saturday, live on Sky Sports Box Office, from 6pm. Book it via your Sky remote or book it online here. Even if you aren’t a Sky TV subscriber you can book and watch it here.