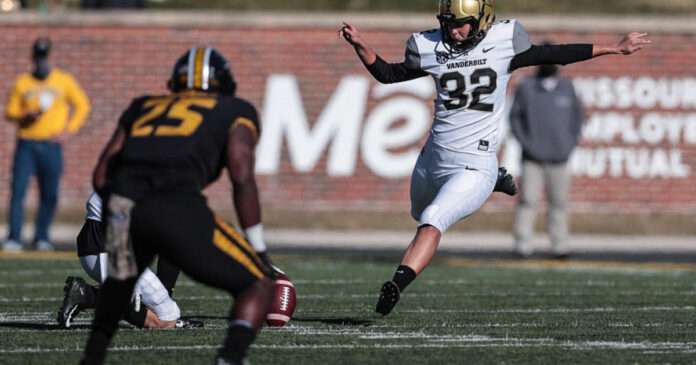 Vanderbilt kicker Sarah Fuller made history on Saturday when she successfully kicked an extra point in the first half of the Commodore’s game against Tennessee. The successful PAT made Fuller the first woman to ever score a point in a Power Five — the name for the five most successful NCAA football conferences — college football game.

Fuller, the Vanderbilt women’s soccer team’s starting goalkeeper, joined the football team last month as the program was dealing with COVID-19 issues, according to CBS Sports. She became the first woman to play in a Power Five game on November 28 when she kicked the ball off to start the second half against Missouri.

“I just want to tell all the girls out there that you can do anything you set your mind to,” Fuller said after playing in her first game. “You really can. If you have that mentality all the way through, you can do big things.”

“I think it’s amazing and incredible,” Fuller said after it was announced she would travel with the team for that Missouri game. “But I’m also trying to separate that because I know this is a job I need to do and I want to help the team out and I want to do the best that I can. Placing that historical aspect aside just helps me focus in on what I need to do. I don’t want to let them down in anyway. It’s an honor they called on me to be able to do this and help them out.”

Fuller is the third woman to ever play in an FBS game, according to CBS Sports. In 2003, Katie Hnida kicked two extra points for New Mexico against Texas State. April Goss kicked an extra point for Kent State in a 2015 game against Delaware State.

Liz Heaton became the first woman to ever score in a college football game when she kicked two extra points for the Willamette Bearcats on October 18, 1997. The Bearcats at the time were a member of the National Association of Intercollegiate Athletics.

Three other women — Jacksonville State’s Ashley Martin, West Alabama’s Tonya Butler and Lebanon Valley’s Brittany Ryan — have also scored in college football games, but none of their teams competed in the FBS division.