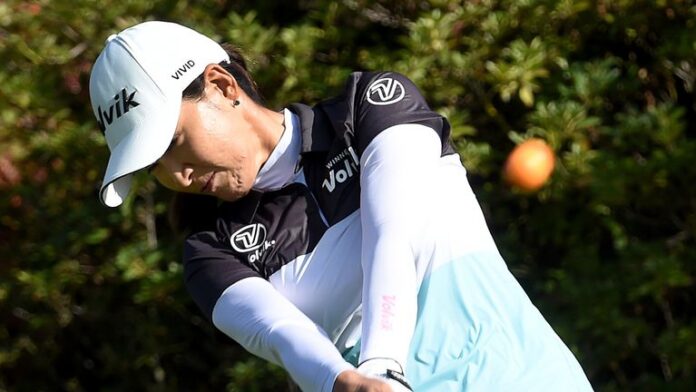 Ji Yeong Kim2 made a huge move up the US Women’s Open leaderboard with one of only two third rounds under par, with Hinako Shibuno hanging onto her lead despite struggling to a three-over 74 on Saturday

Hinako Shibuno maintained her US Women’s Open lead as only two players managed to break par on a brutally tough third day in Houston.

Shibuno, three shots clear overnight, made only one birdie in a three-over 74 that was enough to keep her on top of the leaderboard, although her advantage had been whittled down to a single shot with first-round leader Amy Olson maintaining her challenge for a maiden major with a commendable 71.

Ji Yeong Kim2 posted the round of the day by a large distance, firing a remarkable 67 having started on the 10th, and her fellow South Korean Hae Ran Ryu (70) was the only other player in red figures for the day, while Charley Hull crashed out of contention following a seven-over 78 which left Bronte Law as the leading British player on three over.

Shibuno continued to impress on her US Open debut, calling on her mental fortitude to dig deep and recover from a three-putt bogey at the first, an error she repaired with a birdie at the par-five fifth.

Last year’s Women’s Open champion dropped another shot at the fifth, but she ground out a series of pars before making her third bogey of the round at 14, and despite playing a superb bunker splash-out at the last, her ball trundled eight feet beyond the hole and she shaved the left edge with her putt for par.

Olson looked to be slipping out of the running after being two over through six holes, but the American made light of the hard and fast conditions on the back nine and birdied 13 and 17 to get back to level par for the day, and just one adrift of the leader.

Moriya Jutanugarn was one under for the round and three under overall until she got into trouble at the 17th and ran up a double-bogey six, but the Thai star signed off with a good par to stay under par for the tournament and in a tie for third place with the surging Kim2.

Having been 47th at the halfway stage, Kim2 began her unlikely charge up the leaderboard with a birdie at the 10th, made a pair of twos at the short 16th and fourth holes, and she capped a magnificent, bogey-free round with her fourth gain at the ninth.

That moved Kim2 up 44 places and gave her a significantly later tee time for the final round, which will now start earlier than scheduled due to the threat of thunderstorms arriving in the Houston area, predicted for around lunchtime.

Only the top four completed 54 holes under the card, with former world No 1 Lydia Ko just four off the lead on level par after a solid 72, a performance of grit and consistency soured slightly by a bogey at the last shortly after the New Zealander carded her lone birdie at 17.

Ko is tied for fifth with Yealimi Noh, Solheim Cup star Megan Khang and amateur Kaitlyn Papp, with current world No 1 Jin Young Ko just five off the pace heading into the final major round of the year.

Cristie Kerr, still feeling the effects of the rib injuries she suffered in a freak golf cart accident last week, mixed six bogeys with three birdies in a 74 which saw her slip to two over, although a birdie at the last revived her hopes of a second US Women’s Open title in her 23rd consecutive appearance in the event.

Defending champion Jeongeun Lee6 goes into the last day six behind and needing something special to retain the trophy, while Law put together a creditable 71 featuring 16 pars, keeping her at three under for the week.

Hull stayed calm and composed after a bogey, bogey start and pulled a shot back at the fifth, but her challenge started to unravel with a double-bogey at the short eighth, and a quadruple-bogey eight at the 11th contributed to her sliding out of the top 50.