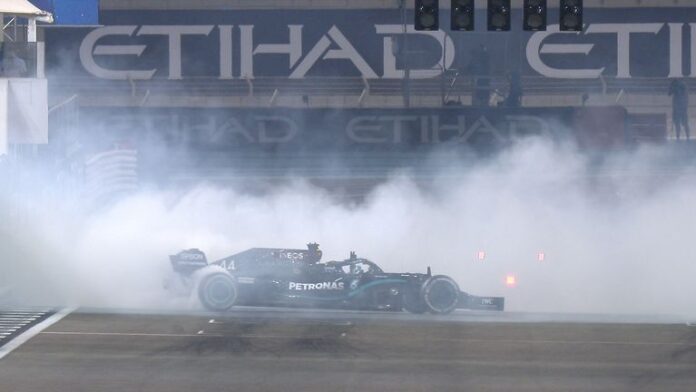 Max Verstappen took an unexpectedly dominant victory for Red Bull at the Abu Dhabi GP as one of the stars of F1 2020 brushed world champions Mercedes aside to finish off the season in impressive style.

It was only Verstappen’s second win of the year, and one he predicted he would have to fight hard for under the Yas Marina lights with Valtteri Bottas and Lewis Hamilton starting behind the surprise pole-sitter.

But Verstappen was comfortable throughout – even after an early Safety Car – and took the chequered flag by 15 seconds, giving himself and Red Bull a welcome boost ahead of a hoped championship fight against Mercedes next year.

“It was really enjoyable out there today,” said Verstappen, the first non-Mercedes driver to win the season-ender since 2013. “We did everything right.”

Bottas held off Hamilton for second with Mercedes, and their 2020 title-winner who was still feeling the effects of coronavirus on his F1 return, uncharacteristically off the pace.

“Considering the past couple of weeks I’ve had I really am generally happy with the weekend,” said Hamilton, F1’s seven-time champion. “It’s obviously not as good perhaps as we would like, but congratulations to Max.

“That was a really hard race for me physically. All the year physically I’ve been fine but today I definitely wasn’t.”

Alex Albon was fourth in the other Red Bull, despite a late charge.

The more decisive battle came behind the season’s fastest cars, as Lando Norris and Carlos Sainz finished in fifth and sixth to clinch third place for McLaren in the Constructors’ Championship – their best result since 2012.

McLaren came into the concluding race 10 points behind Racing Point, but Lance Stroll only collected one point while Sergio Perez, who was starting on the back row, lasted only eight laps before a reliability failure.

The Mexican, in his last race for Racing Point, was the only retirement from the 55-lap race.

Sainz is under investigation for driving unnecessarily slowly in the pit-lane – which held up Stroll – but any punishment isn’t expected to alter the final team positions.

Daniel Ricciardo was seventh for Renault after an impressive long stint, setting the fastest lap of the race on his last lap with the team before joining McLaren next year, with Pierre Gasly and Esteban Ocon also in the top-10.

Charles Leclerc and Sebastian Vettel, who both gambled by staying out of the pits under the Safety Car, finished only 13th and 14th, with the German four-time world champion unlikely to fondly remember his last race, or last season with F1’s most successful team.

The Abu Dhabi GP, the 17th and final race of a delayed and extraordinarily intense season, lacked the drama of previous races but did nevertheless provide signs of promise for next year’s expected 23-race campaign.

Verstappen dominated from pole – just his third in F1 – to successfully close off a season, in which he has been frustratingly adrift from the Mercedes.

Red Bull, who have been steadily gaining on F1’s world champions towards the end of the season, hope to consistently challenge them in 2021, when there will be few changes to the cars.

McLaren can also go into the winter on a high after a fantastic result, sealing their most points on a Sunday since early September’s Italian GP. The on-track success came after an off-track boost on Sunday, too, with the team selling a big stake to US-based investors in a bid to move further up the field.

The Woking outfit will take Mercedes engines next year, which have consistently been the fastest Power Units in F1 since 2014.

Perez wrapped up fourth in the Drivers’ Championship despite his point-less Racing Point finish, and now faces a nervous wait on his F1 future with Red Bull set to make a decision on Albon’s seat in the coming weeks.

Daniil Kvyat also could be waving goodbye to F1 and he finished 11th for AlphaTauri, while Kevin Magnussen, 18th for Haas and only ahead of stand-in team-mate Pietro Fittipaldi, is definitely leaving the grid.

George Russell, returning to the Williams after superbly replacing Hamilton last weekend in Bahrain, was 15th for Williams.