Home Sport Why Fury may fear the new version of Joshua 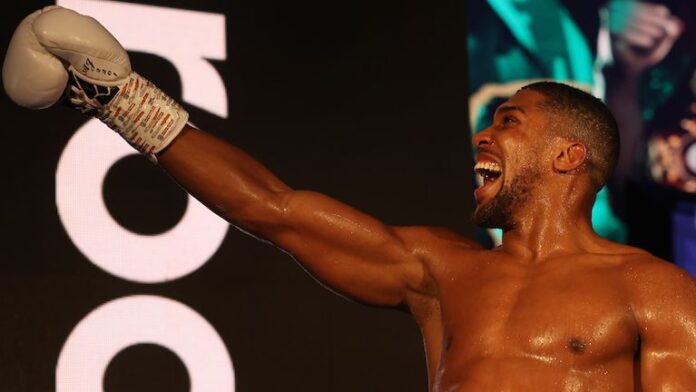 Like a bolt of electricity Kubrat Pulev was sent careering backwards, and Anthony Joshua swaggered off without even bothering to check if his latest victim was getting up. It was mesmerising – he knew, we all knew.

There is magic in the right fist of Joshua but it had been too long since we saw it – it has been an 18-month spell of heartbreak, doubts and eventually redemption but boxing can be a simple sport sometimes and all it took was a massive blast of the champion’s favourite weapon to make everything OK again.

Suddenly the Tyson Fury debate rages in a different direction – Joshua has rediscovered his aggression, uncorked his first KO in two years but the real clues about what might worry Fury were hidden behind the blur of his flying fists.

First; the finish – who else in boxing knocks a man out like Joshua does?

Deontay Wilder’s clubbing style of the one-punch variety is devastating in its own right but there is nothing more exhilarating than Joshua in full flow, there is nobody with more of a cruel instinct to know precisely when an opponent is teetering on the verge of collapse.

Joshua was unfortunate not to have steamrolled Pulev in the third round – the Bulgarian was admirably praised for his toughness but during the most breathtaking assault of the fight, he was caught in such a whirlwind of punishment that he turned 180 degrees, put his right hand on the rope and stood defenceless with his back to Joshua and the referee.

It was a brief, subconscious moment of submission from Pulev which drew only a standing count from the referee – the fight continued and that may go some way to explaining why Joshua lowered the volume in the next three or four rounds. Yes, he was conserving energy but he must have also felt that Pulev had stopped fighting for long enough to warrant the referee’s permanent intervention.

The KO was vintage Joshua of old – the young boy who toured Glasgow, Sheffield, Liverpool and Newcastle cracking jaws when it wasn’t such a serious game. Middle of the ring, one-two, jab and a right hand, bang.

There was an arrogance and an aggression to Joshua’s performance and his personality over the past three days that has been missing since he was shocked by Andy Ruiz Jr.

The Ruiz Jr saga forced Joshua to be introspective and disciplined but, with the IBF, WBA and WBO belts back around his waist, he has not been in the mood all week to tolerate Pulev taking liberties.

On Thursday Joshua stared daggers at his challenger when Pulev shouted: ‘And the new!’

On Friday Joshua could no longer contain his frustration and told Pulev during the weigh-in melee: “Tomorrow, try it. Tomorrow try your best and we’ll see who the last man standing is.”

Saturday began with Joshua refusing to break eye contact with Pulev as he marched towards the ring and strode over the top rope – they then fist bumped with such intensity that it might have counted as a scoring punch on the judges’ cards.

It is worth rejoicing that the vengeful Joshua is back because, for as lovely as his smile and his charm might be, it is the nasty side of him that makes a future fight with Fury so compelling.

“He was stuck between two styles,” came the criticism at ringside from Dillian Whyte – he’s right, but is that a bad thing?

The marked improvement that Joshua had been promising was delivered in the quietest moments of the fight, the segments long forgotten but the ones that equip him to trouble Fury in a way that critics did not expect until 11pm on Saturday night.

In previous fights with Wladimir Klitschko and Ruiz Jr, Joshua had lost composure and control when his opponent climbed off the canvas and refused to budge early.

Against Pulev he simply took a step backwards and a deep breath rather than continue piling forwards recklessly and risk getting clobbered in return.

“I want to see a disciplined performance, a bit of the old AJ but a bit of the new AJ as well,” was the pre-fight demand from Joby Clayton, who Joshua had brought into his training team to teach stance, posture and calmness under pressure.

“I still want him not to get hit. I want him to be the AJ that is so exciting and devastating,” Clayton continued, and that is ultimately what we got.

Hours after midnight Joshua was still engrossed backstage by advice from Floyd Mayweather, a surprise attendee at ringside and owner of the highest IQ inside a boxing ring of his generation.

Mayweather’s otherworldly brilliance meant that, in 50 fights, he never had to recover from a setback but, in his own way, he was forced to add brains to his brawn in a way that Joshua is now doing.

It was the second legend in four days that Joshua had absorbed knowledge from like a sponge – last Wednesday he spoke to his rival and mentor Klitschko who was formerly the only man to beat Pulev.

It is a reminder that, an Olympic gold medal and 10 world heavyweight championship fights into a career that has made him a mega-star, Joshua has never been more open to feedback from those who have tamed this ferocious game.

Memories of the way Fury took Wilder apart so convincingly are still fresh, and for the harshest critics so are memories of Joshua’s unravelling against Ruiz Jr but there is now genuine reason to believe he has evolved since that catastrophe in New York.

Joshua and Fury in the ring together is the stuff of fantasy – it will push and pull the British public one way then the other like no fight in history, it will create tribal fan-bases before everybody’s predictions flip when the heavyweights first make eye contact (what a chilling moment that will be).

“I will knock him out inside three rounds,” claimed Fury but Saturday night and the days of reflection afterwards belong to Joshua, a champion of courage who has put a bruising chapter of his career firmly behind him and morphed into the most intimidating version of himself that has ever existed.