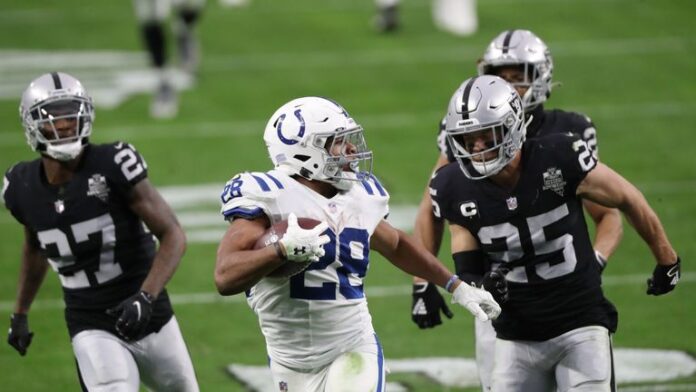 Colts quarterback Philip Rivers throws for 244 yards and two touchdowns as he secures his 19th career victory against the Raiders, while he also breaks a tie with Hall of Famer John Elway for most career starts (29) against the franchise

Rookie running back Jonathan Taylor rushed for a career-high 150 yards and two touchdowns as the Indianapolis Colts routed the Las Vegas Raiders 44-27 in a crucial matchup in the AFC playoff picture.

​​​​​​Colts receiver T.Y. Hilton also had two TDs in the contest, as he caught five passes for 86 yards; the Colts racked up 456 yards in total offence, including a season-best 212 rushing yards.

Kenny Moore led the was for the Indianapolis defence, as he hauled in highlight-reel one-handed interception in the endzone and also forced a fumble. Khari Willis added a 53-yard interception of Derek Carr in the fourth quarter, returning it for a touchdown – the team’s fourth pick-six of the season.

It was Philip Rivers’ 19th career victory against the Raiders, with the veteran quarterback also breaking a tie with Hall of Famer John Elway for most career starts (29) against the franchise.

Indianapolis (9-4) move up to the No 6 seed in the AFC playoff race with their fifth road win in seven tries this season; the Raiders (7-6) stay on the outside looking in after falling to 2-4 on the season at their new Vegas home of the Allegiant Stadium.

Carr threw for 316 yards and two touchdowns for the Raiders to see them into a 14-10 lead early in the second quarter, but Rivers and Hilton hooked up for twice with scores of seven and 41 yards, to go with Rodrigo Blankenship field goals of 25 and 20 yards, as Indianapolis built a 20-14 half-time lead.

It was Taylor who took over the game in the second half, breaking free for a 62-yard touchdown run – the longest offensive play of the season for the Colts.

After Las Vegas cut into the Colts’ lead at 27-20, courtesy of Daniel Carlson’s second field goal of the third quarter, Taylor found the endzone again, this time capping a 10-play, 75-yard drive with a three-yard scoring run.

One play later, Moore forced a fumble after a short completion from Carr to Hunter Renfrow and Blankenship booted a further field goal to increase Indianapolis’ lead to 37-20 with seven minutes to play.

If it wasn’t game over already, the Colts then sealed the victory four plays later when a Carr pass was deflected off the hands of Jalen Richard to Willis who returned it 53 yards up the left sideline to make it 44-20.

Carr ended the scoring with nothing more than a consolation touchdown run from five yards out with 55 seconds left.