Home Culture Bieber ‘humbled’ by teaming up with NHS choir in bid for Xmas... 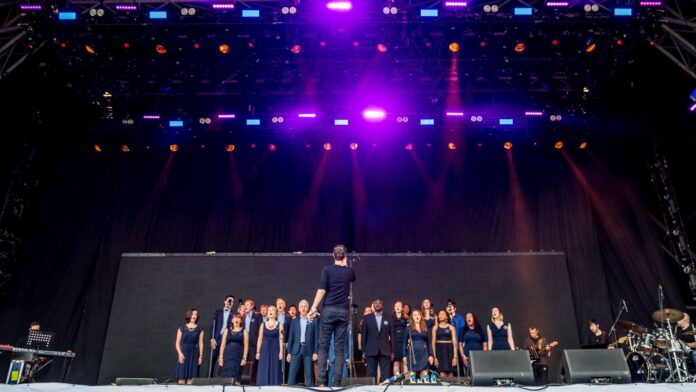 The NHS choir are rivals-turned-Beliebers after teaming up with Justin Bieber five years after beating him to the Christmas number one spot.

The Lewisham and Greenwich choir shot to fame in 2015 after nabbing the top spot from the Canadian superstar after he urged his fans to support them.

The choir has now added their voices to a special version of his track Holy in a bid to bag another Christmas number one.

If they succeed, the profits will be split between NHS Charities Together and the choir’s local NHS trust charity.

The piano-led song, which also features Chance the Rapper, focuses on 26-year-old Bieber’s Christian beliefs and his love for his model wife Hailey.

Bieber said he was “humbled” to work with the choir.

He said: “It’s great to be reunited with the Lewisham and Greenwich NHS choir, as we share a fun bit of UK chart history together.

“Especially in these difficult times, I’m humbled to team up with them for a charity single that will benefit NHS workers on the frontlines of this pandemic and pay tribute to their unbelievable dedication.”

Choir member and midwife Lizzie Farrant, 39, who was redeployed during the COVID-19 pandemic to help with staff shortages, said: “What a year it has been. We talk about the Christmas number one all of the time.

“It’s given us so much. And whenever we talk about the Christmas number one, Justin Bieber is never far from our lips. They are synonymous with each other.”

She added it was “really fantastic” when Bieber got in touch to say: “I would really like to do this collaboration and share this with you”.

Ms Farrant said she recalled meeting Bieber after he flew to London to hand them their chart award, and described him as “very welcoming and so supportive of us as healthcare professionals”.

She added: “He was really supportive of us as an entity and what we do.”

The unlikely partnership began in 2015 when Bieber’s hit single Love Yourself and the choir’s A Bridge Over You went head-to-head for the Christmas number one.

Bieber told his then 80 million Twitter followers to “do the right thing” and help the choir reach the top of the singles chart.

After flying to London to present the choir with their trophy in person, he said: “I was honoured to meet everyone from the choir and I’m really happy that they got their number one.”

Holy by Justin Bieber and Lewisham And Greenwich NHS Choir is available on Friday 18 December.