Home Culture Mass Transit Is in Jeopardy—and So Are Cities 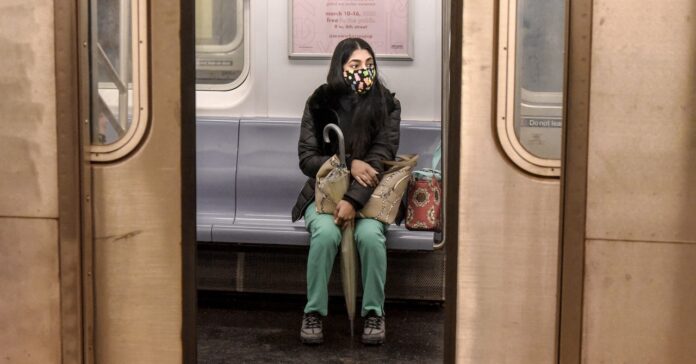 In the New York City of February 2020, a missed subway train was mostly a nuisance. Chances were, another one was coming a few minutes later. In February 2022, the sight of a subway train receding into the distance just as you reach the platform may feel more existential. The next one? Fifteen or 20 minutes away, enough lost time to make shift workers late to clock in and desk jockeys tardy enough to catch the eye of the dude in the corner office.

New York’s Metropolitan Transportation Authority is the agency that runs the city’s subway system, plus the region’s buses and commuter rail. It serves four of every 10 of the nation’s public transit riders. Now, amidst a pandemic, a recession, and record-breaking drops in ridership, MTA leaders say the agency needs an additional $12 billion for 2021—or everything will fall apart. Really: The MTA might have to cut service by 40 to 50 percent and lay off more than 9,000 workers, the people that have kept the system running in the midst of the pandemic despite a roughly 70 percent drop in daily riders. It will likely delay capital projects indefinitely, like an anticipated subway extension into a transit-neglected part of Manhattan’s Harlem neighborhood; some will be canceled.

“The MTA is facing a once-in-a-hundred-year fiscal tsunami,” MTA CEO Pat Foye told a public radio program last week, noting that neither Hurricane Sandy nor 9/11 nor even the Great Depression posed as great a threat to transit service.

If you don’t ride transit, this may not sound too bad. But cities are networks. Effects cascade. Too many late days at work, and your job isn’t yours anymore. Too many lengthy commutes, and you realize it’s not feasible to travel downtown anymore or take any of the high-paying jobs there. If public transit is supposed to be a vehicle for opportunity (no pun intended), then a broken system only leads to a broken city, where some people get lucky breaks, and lots of others do not. Post-public-transit New York—post-public-transit anywhere—might not be pretty.

Subpar transit service “eats into people’s time in a way that affects happiness and health and the amount of time they can be with their families,” says Ben Fried, communications director for the research and advocacy group TransitCenter.

New York is unique. The region is more transit-dependent than anywhere else in the country, and a greater cross-section of its residents hop on the subway. Still, the scene repeats itself across the nation, in places where transit is more likely to be a safety net for those who cannot afford a car or, for reasons of age or disability, aren’t able to drive one. The San Francisco Bay Area’s BART system faces a $200 million shortfall through next summer; it’s working to persuade the agency’s retirement-age workers to bow out so it can avoid layoffs. The DC area’s Metro system says it won’t have enough in the bank to keep running trains on weeknights past 9 pm—or on weekends altogether. Denver has already made $140 million in cuts.

A $908 billion stimulus bill under consideration by Congress would pass $15 billion on to the nation’s transit systems. The American Public Transportation Association, the industry’s lobbying group, says systems need at least $32 billion to ride out the next fiscal year. That’s in addition to last spring’s CARES Act, which funneled $25 billion to transit—money that many officials say has already run out.

Research published in October by NYU’s Rudin Center of Transportation suggests that the MTA’s proposed cuts could lead to the loss of as many as 450,000 jobs and $50 billion in earnings in the region, tanking the area’s GDP by $65 billion. That includes the effects of the agency’s potential 9,000 layoffs and the jobs that go unfilled if the agency doesn’t hire suppliers and contractors for capital projects. It also includes the jobs that disappear if, frustrated by less frequent and more crowded buses and trains, people stop traveling into business districts like Manhattan for work, including 38,600 food preparation jobs and 66,200 office and administrative support jobs. Regional transit misery, the paper suggests, generally multiplies.