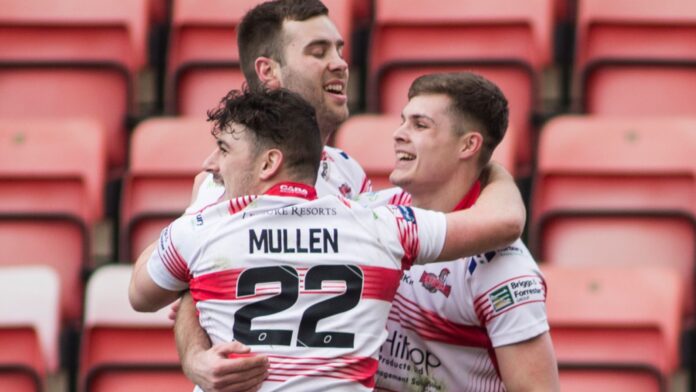 Leigh Centurions will play in the Super League next year after the unanimous decision of an independent panel, which was impressed by the club’s top-class players, stadium and passionate fans

“I’ve just stopped crying – I’m so happy for everyone who has put so much work into the criteria document,” said Duffy.

“We are Super League ready – we’ve got a stadium which is hosting World Cup games, a chairman who is putting in the money, and we’ve been there and done it.

“I think it’s exciting more than daunting. We are straight in with getting up to speed, and our goal is to give it a good go and make sure we stay in Super League.”

Leigh were the unanimous choice of an independent seven-person panel led by Lord Caine, which met four times and had eight hours of discussions before the verdict was announced.

The club have not played in Super League since they were relegated in 2017, but had won all four of their games in this year’s curtailed Championship campaign.

Toulouse, the Championship leaders when the coronavirus pandemic forced the season’s abandonment in March, had been bidding to join Catalans Dragons as a French club in the top flight.

Toulouse said in a brief statement: “We are obviously disappointed but we are already focused on the next Championship season, with the same goal.”

Congratulations to @LeighCenturions on their selection for the 2021 Super League 👏
Our plans dont change, we will push on for promotion via the Championship ⚫⚪🔴 pic.twitter.com/iyH4rMofwK

London, who were relegated last year on points difference, and who had been linked with a possible ground-share at AFC Wimbledon if selected, tweeted: “Our plans don’t change, we will push on for promotion via the Championship.”