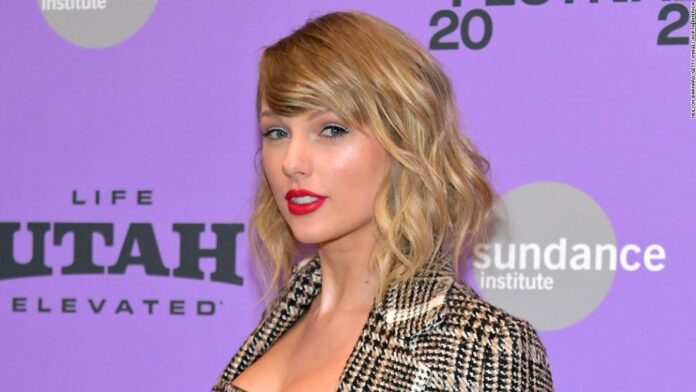 Taylor Swift has already given us two surprise albums this year, “Folklore” and “Evermore,” and there were fan theories that a third, titled “Woodvale,” was coming.
The superstar singer appeared Monday night on “Jimmy Kimmel Live” and chatted a bit about turning 31 on December 13.
Then talk turned to people spotting the word “Woodvale” on the cover of her “Folklore” album and believing it was meant to signify a third album.
For the record Swift is good for such Easter eggs which frequently pop up in her music videos and social media postings.
But she told Kimmel the whole “Woodvale” thing “takes a bit of explanation.”
“I tend to be sort of annoyingly secret agenty about dropping clues and hints and Easter eggs and it’s very annoying, but it’s fun for fans and it’s fun for me because they like to pick up on things,” she explained. “And they’ll notice lots of things in music videos or photos or whatever and then sometimes I take it too far and I make a mistake.”
According to Swift, while making “Folklore” she was “too afraid to even unveil the title of the album to even my closest teammates and management.”
“I didn’t tell anybody the album title until right before it came out,” she said. “And so I came up with a fake code name that had the same amount of letters as ‘Folklore.'”
So she chose “Woodvale” and had a mockup of the cover done to see what it would look like. The only problem is once she decided she actually didn’t want to have a title on the album cover she says they forgot to take the code name off.
Kimmel was dubious that the singer and her team could have made such an error and questioned Swift as to whether she was telling the truth, to which she insisted she was.
Which is why the code name for the “Evermore” album, “November,” didn’t end up on any covers.
“We remembered to take it off all the mock-ups of the album cover this time,” Swift said. “We learned our lesson.”