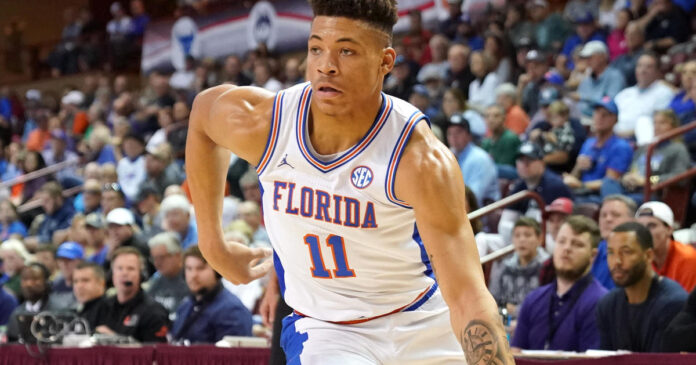 Florida Gators basketball start Keyontae Johnson is in stable condition after collapsing on the court during Saturday’s game. Johnson, who is hospitalized at UF Health in Gainesville, was reportedly placed into a medically induced coma earlier in the week but is now able to speak and communicate.

“Keyontae is in stable condition today, breathing on his own, and speaking with us and with his doctors here at UF Health. He even FaceTimed the team!” Johnson’s parents, Nika and Marrecus Johnson shared in a statement Tuesday. “We feel so much love and support from everyone, and we’re beyond grateful for the care and attention that Keyontae has received throughout these past several days.”

Johnson, the Southeastern Conference’s preseason player of the year, collapsed during Saturday’s game against the Florida State Seminoles. The 21-year-old junior received medical attention court-side before being placed in an ambulance and taken to Tallahassee Memorial Hospital.

Shortly after his collapse, the Gators announced Johnson was in stable but critical condition. His parents were flown in from Norfolk, Virginia, and his mother accompanied him to the UF Health facility via helicopter.

Head coach Mike White on Tuesday thanked fans for their support. “Thank you so much to everyone for all your prayers. Keep them coming,” White tweeted.

Johnson’s doctors and family haven’t released the reason behind his collapse. He was one of several Gator players that tested positive for COVID-19 during the summer. A known effect of COVID-19 is myocarditis, an infection of the heart muscle. However, conference rules also dictate that all players must go through heart testing and physicals before players can return to the court.

Johnson’s collapse Saturday left many of his fellow teammates distraught. Florida’s Wednesday game against North Florida was called off and has not yet been scheduled for a later date.