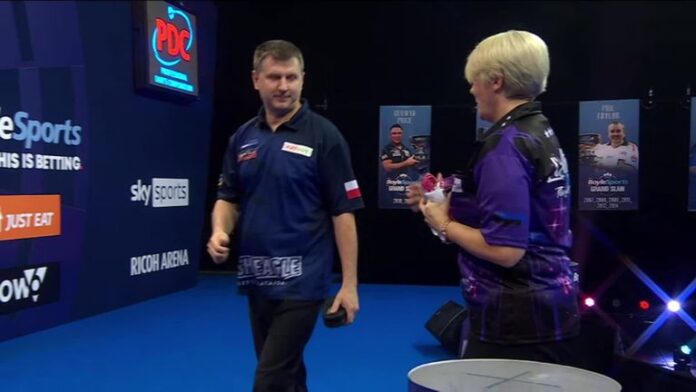 Lisa Ashton is in action against Adam Hunt on Wednesday night as coverage continues on Sky Sports Darts; Glen Durrant and Max Hopp among the other names in action

When Lisa Ashton takes to the Alexandra Palace stage on Wednesday night, she will do so better placed than ever to emulate the landmark feats of Fallon Sherrock last year.

Ashton gets her second chance two years after a first-round defeat to Jan Dekker, and 12 months on from Sherrock’s show-stealing turn that made headlines across the globe as she became the first woman to beat a man at the PDC World Championship.

The Lancashire Rose, a four-time women’s world champion, takes on Adam Hunt on Wednesday night, as the first of this year’s female competitors to take to the Ally Pally stage.

After winning the Grand Slam of Darts women’s qualifier, a dominant display in the Women’s Series saw Ashton claim top spot in the two-day Order of Merit to secure her return to Ally Pally, having missed out to Sherrock last year.

Deta Hedman joined her and Sherrock was the unlucky player to miss out. Sherrock’s victories over Ted Evetts and Mensur Suljovic last year had appeared as unlikely, as much as they were celebrated, given Sherrock had not made huge inroads in the women’s game.

The Queen of the Palace has risen to the challenge and now sits at the head of the women’s game alongside the back-to-back women’s world champion Mikuru Suzuki but for many, Ashton is the player who has led the way for women’s darts.

That was evident at Q-School in January where Ashton, one year on from missing out by the narrowest of margins, secured a Tour Card over five days of competition against more than 500 other players – the first woman to earn her right to play on the Pro Tour via that path.

Lisa and Deta have played in the biggest ladies events in the world and Lisa has had the class to be able to play in a good few of the men’s events now.

Playing in front of a crowd, playing in front of the cameras that certainly won’t daunt them, they have miles of experience behind them and I think they will want to play well and play the way they know they can.

Ashton will not have the vociferous support of a crowd this year as the tournament goes behind closed doors following the latest government advice, but what she will have is a year of mixing it with the PDC.

However what she has is a victory over Hunt, one of 20 victories she has racked up on the Pro Tour this season, but she is still without an elusive TV victory, having played at the UK Open, the Grand Slam as well as the World Championship.

Wednesday Evening at the Darts (6pm)

“It’s a real big game for her because she has been mixing it with the men in the World Championships and in the Grand Slams and she’s come up short every time,” said Sky Sports’ Wayne Mardle.

“She can beat Adam Hunt, she beat him quite recently in a Pro Tour event and he knows that. He did really well to get out of his group at the Grand Slam but I think Lisa knows she has the game to win that game.

“It’s a big game for her and I believe she can win it, and I hope she does as well.”

Ashton was a 6-4 winner over Hunt in July at the Summer Series, while Rob Cross, Dimitri Van den Bergh, Michael Smith, Gabriel Clemens and potential second-round opponent Jamie Hughes have all been conquered this season.

By her own admission, Ashton feels she could have done more this season. Runs to the third and fourth round of Players Championship events have been common, while she has also come within one win of reaching a European Tour event.

At the Grand Slam of Darts in November, Ashton’s last competitive action, she powered into a 4-1 lead over the world No 15 Krzysztof Ratajski only to see the Polish Eagle produce four legs of blistering quality.

Mardle believes after two years in the spotlight there is more pressure on Ashton, but she is better placed than ever to handle it.

“She led 4-1 against Krzysztof Ratajski in the Grand Slam and didn’t get it done, but he averaged something like 120 in the last four legs so that’s fine!

“But, when you keep giving yourself opportunities and failing, the games keep getting bigger and bigger when you have a chance to actually succeed.”

Opportunities have been there for Ashton this year via her Tour Card, while Sherrock was due to have played in the World Series as a result of her exploits in north London but the coronavirus pandemic has scuppered those hopes.

Amid all the uncertainty at the current time, opportunities for women’s darts is in short supply. As things stand there is no BDO World Championship scheduled for January as the embattled organisation stands on the brink of demise.

Q-School offers a chance and the number of female competitors there is likely to swell in January, and while the Challenge and Development Tours offer a chance to progress, both Tours have been forced to offer a diminished schedule.

“From a women’s darts perspective, we haven’t really had anything other than the grassroots game. We haven’t had those professional opportunities where you can invest the time because you’re getting rewarded for playing. We haven’t had such a visible sport.

“Our World Championship started 23 years after the original one that Leighton Rees won and you just think, it’s playing a bit of catch-up.

“As you’ve seen with the Asian Tour, this is a great opportunity to not just encourage more people to play because you’re making it more visible, but also it’s going to develop the standard.”

The standard is rising – Sherrock, Hedman and Suzuki are evidence of that alongside Ashton.

The old adage in darts is taking your floor form to the TV stage. Ashton gets the chance to do just that herself. Her floor form shows a win over Hunt, another on Wednesday night and the global headlines generated by Sherrock may be replicated.

Don’t miss a dart this Christmas with the dedicated Sky Sports Darts channel all the way until January 4 with every session from the World Darts Championship, including the final on Sunday, January 3. Check out daily Darts news on skysports.com/darts, our app for mobile devices and our Twitter account @skysportsdarts