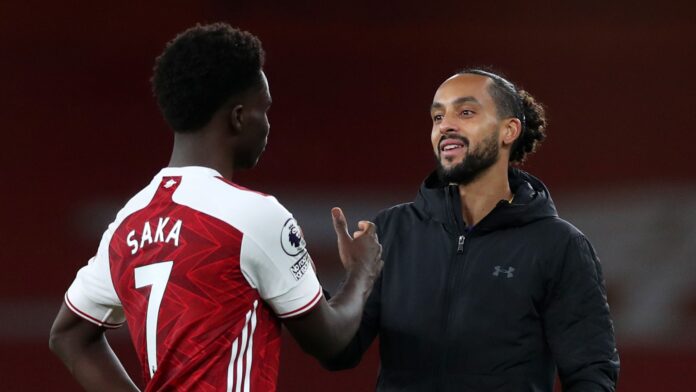 The Gunners’ recent problems deepened when Theo Walcott opened the scoring in the 18th minute to give Southampton the lead against his former club.

The hosts responded after half-time as Aubameyang (52) ended a run of 648 minutes without a Premier League goal at the Emirates Stadium to bring his side level, but more ill-discipline thwarted the Gunners’ recovery.

Gabriel was sent off (62) for two bookable offences in the space of four minutes as Arsenal were forced to end a second straight match with 10-men.

Southampton pushed hard for a winner to pile the pressure on Mikel Arteta at Arsenal, but substitute Nathan Redmond’s strike rattled the crossbar, while Rob Holding almost snatched the three points for the hosts as his late header hit the woodwork.

However, the Gunners, who stay 15th, clung on for a much-needed point. At the other end of the table, the point sees Southampton, who will be disappointed to have not won the game, move up to third as their impressive season continues.

How Arsenal clung on against Southampton…

Arteta tried to freshen up his attack with Nicolas Pepe and Eddie Nketiah replacing Alexandre Lacazette and Willian, but it was the three-man defence he reverted to that was under pressure in the opening stages as Southampton started brightly.

Man of the match: Theo Walcott.

And the visitors were rewarded with the 18th minute when Walcott finished in fine style against his former club, dinking over the onrushing Bernd Leno having been played in by a smart through ball from Che Adams.

As for most of the season, Arsenal struggled for any kind of rhythm early on, but they eventually grew into the game and created a couple of excellent opportunities.

Dani Ceballos thought he should have had a penalty when challenged by Jan Bednarek in the box, but referee Paul Tierney waved away the Arsenal appeals before Bukayo Saka’s deflected cross was kept out by goalkeeper Alex McCarthy.

Pepe then had a clear sight of goal after being picked out by Ceballos’ pass, but the forward’s first-time shot was straight at McCarthy as the visitors took their lead to the break.

Arsenal were back on terms shortly after the restart though, captain Aubameyang sweeping home a fine move to end his own barren run in front of goal. It was made by Saka, who cut in off the left flank and fed Nketiah, who flicked the ball around the corner for Aubameyang to finish in trademark style.

As quick as the Gunners were back into the contest, they were out of it again as disciplinary issues continued to hamper Arteta’s side.

Shortly after the goal, Gabriel was sent off by referee Paul Tierney for two bookable offences in the space of four minutes – the second for a foul on Walcott, who turned and looked to get away from the Brazilian on halfway.

It was Arsenal’s second red card in as many matches and third in the space of five matches following Granit Xhaka’s dismissal in the 1-0 loss to Burnley last Sunday and Pepe’s red card against Leeds last month.

They were forced to play out the final 28 minutes of the match with 10 men as Southampton went straight on the attack, and they were inches away from grabbing a winner when Redmond’s strike beat Leno but struck the crossbar.

Saints thought they should have had a penalty late when Holding bundled into Moussa Djenepo, but the referee and VAR were unmoved, while at the other end Holding almost secured the three points for Arsenal, but his header looped onto the crossbar as the spoils were shared.

Arsenal boss Mikel Arteta: “We didn’t have time to think, we adjusted two or three things to try and win the game. The boys came out like we did three days ago, we scored a really good goal, on top in the game, and again we shoot ourselves in the foot.

“When you cannot win it, you don’t lose it. Going again with 10 men and playing so long against a good side you have to take it. The boys defended with their lives and you have to take a point.”

On Gabriel’s red card: “Very [disappointed] because in that moment I was thinking to change the centre-back straight away – we didn’t even have time to do that. In the end, we got a point that considering the circumstances we have to accept.”

Southampton boss Ralph Hasenhuttl: “We have shown what we have learned in the past and that is to play our game, it was a good performance, not all the time, but we get more and more confident playing in possession.

“They tried more risks after half-time, pressed a little bit earlier and automatically you get a little bit under pressure. This is a team that is normally above us in the table. It was good to see we can still be competitive. Teams have respect for what we are doing and how we are playing. I am OK with a point.”

Man of the match – Theo Walcott

Arsenal’s players were all smiles when greeting Walcott after the final whistle, but during the game they would have been sick of the sight of their former colleague.

In the 63 minutes he was on the pitch, he caused Arsenal’s three-man defence all sorts of problems with his pace and clever runs, and he also produced an excellent finish to give Saints an early lead.

Before his second half departure, he also played a crucial role in turning the momentum back to Southampton, turning Gabriel and drawing the foul which saw him receive his marching orders.

All in all, a good night’s work for Walcott back in north London.

“Walcott is a fantastic signing. Footballers are getting younger and younger but the older ones who want to be professional can still help you and I am very happy he is here.”

24 – The average age of Arsenal’s line-up against Southampton is 24 years and 349 days old, the youngest starting XI for the Gunners at the Emirates in a Premier League game since September 2012, also against the Saints (24y 266d). Fresh. pic.twitter.com/2HMMzpEaRZ

Arsenal face a trip to Goodison Park to play Everton on Saturday, live on Sky Sports (5.30pm kick off).

Southampton are also in Premier League action on Saturday when they host Manchester City; kick off 3pm.