Home Culture ‘The Stand’ turns Stephen King’s epic book into what feels like a... 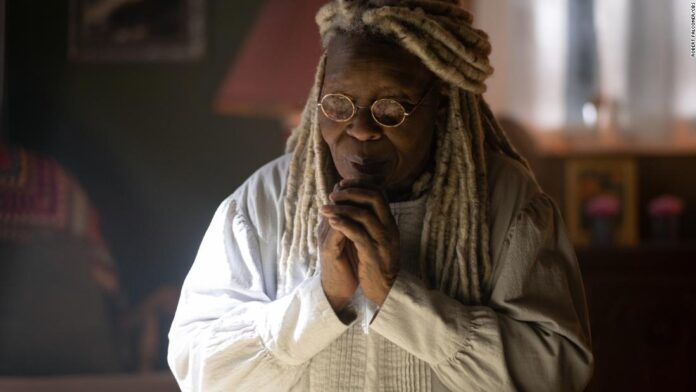 King’s epic story — which begins with a mysterious pandemic, leaving behind the remnants of humanity at its best and worst — can feel tough to watch given current events in the early going, as people die and the social fabric breaks down.
The filmmakers follow that introductory portion by leaping around in time, jumping ahead to the new communities that sprout up in Boulder, Colorado and “New Vegas,” flashing back to flesh out members from the sprawling roster of characters.
The casting is, for the most part, quite good, if a little tardy in showcasing more marquee-worthy members. That includes Whoopi Goldberg as the 100-plus-year-old Mother Abagail, the prophet leading the forces of righteousness; and Alexander Skarsgard as Randall Flagg, a.k.a. the Dark Man, the personification of seductive sin, and perhaps the most conspicuous upgrade over the previous adaptation.
Ultimately, “The Stand” must wade through a lot of character beats to reach the meat of the plot, which hinges on the inevitable conflict between these two assemblies of survivors.
At nine hours (minus commercials, the eight-part original ran about six on ABC), the format does allow for more nuance and detail, but not in a way that proves especially additive. As is so often true, just increasing the volume by 50% doesn’t necessarily benefit the storytelling, either in its clarity or economy.
Similarly, the orgiastic decadence of New Vegas and brutality of a crumbling society can be depicted more starkly in a streaming environment — it’s the equivalent of an R-rated movie versus PG-13 — an element of creative license that doesn’t make a significant difference.
For those who enjoyed the original inclined to ask, “Why do I need this?,” the answer is pretty well “You don’t,” other than a promised new coda to the story written by King. (Six of the nine chapters, which will debut weekly, were made available to critics.)
As for the aforementioned cast, James Marsden, Greg Kinnear, Jovan Odepo, Odessa Young and Henry Zaga play the leaders of Mother Abagail’s nice-people council, with Amber Heard and Owen Teague as the fallen Nadine and Harold, respectively.
Produced under showrunner Benjamin Cavell (“SEAL Team”), there is some gallows humor sprinkled amid the drama, such as Harold’s friend observing that Nadine “may be the hottest woman on Earth — I mean, left.”
Most recently fueled by “It’s” box-office success, King’s popularity as a source for movies and TV remains unabated, including second bites at stories brought to the screen a few decades ago.
On the theory that each generation will get its own version of King’s top titles, this one meets the basic standards — touching on the author’s signature themes while dishing out old-fashioned popcorn via a relatively new-fangled medium. At nine hours, though, it’s hard to escape the nagging sensation that “The Stand” is a long sit.
“The Stand” premieres Dec. 17 on CBS All Access.