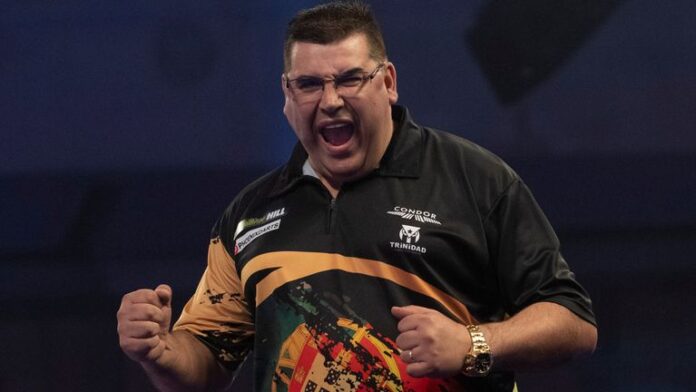 Grand Slam of Darts champion Jose de Sousa laid down an early marker with his first victory at the World Championship, while Daryl Gurney survived a scare to progress on Thursday.

De Sousa, who became the first Portuguese player to win a PDC major televised title at the Grand Slam last month, made it through to the third round at Alexandra Palace after recording his first victory at the fourth attempt by defeating Ross Smith.

Former World Grand Prix winner Gurney defied a spirited fightback from former World Cup finalist William O’Connor to book his place in the next round.

Thursday night’s results at the Worlds

Special win for The Special One

De Sousa was forced to dig deep from a set down to clinch a 3-1 victory over Smith.

Former Lakeside quarter-finalist Smith had finishes of 108 and 72 before pinning D5 to sweep through the first set in some style.

Smudger Smith nailed a clinical 136 in the second leg of the second set, but the Portuguese star quickly rallied back to tie it up at one set apiece.

De Sousa hit the front for the first time in the third leg of the third set before sinking tops to claim six out of eight legs and move to within a set of the third round. Smith pinned a neat 127 to stope the rot, although that seemed to fire De Sousa up as he won three straight legs to complete the win.

Gurney has endured a disappointing 2020 by his standards, but he made a blistering start to his campaign – winning six of the opening seven legs with an average of 107.

O’Connor was staring down the barrel, but he was gifted an unexpected reprieve in set three, as Northern Irishman Gurney squandered four match darts.

This galvanised ‘The Magpie’, who produced a sublime 122 checkout en route to restoring parity at two sets apiece, and he had the advantage of throw in the deciding set.

However, he was punished for wiring double 16 for a 112 combination in the first leg of the set and Gurney regained his poise to wrap it up without reply to triumph.

Thursday afternoon’s results at the Worlds

Lewis back from the brink

Woody, who hit a nine-darter in his kitchen during the PDC Home Tour earlier this year, made Lewis pay for declining the bull by taking out 145 on his way to a whitewash opening set.

Woodhouse continued his excellent form in the second set with ton-plus finishes of 102 and 101 to move within a set of victory. The Welshman, who has admitted to struggling with anxiety issues this year, wrapped up the third set to halve the deficit.

Woodhouse, 32, notched his fourth ton-plus finish with a 121 out in the fourth set but it was Lewis who displayed a terrific show of resilience to make it back-to-back sets and send it into a decider. And timely back-to-back 11-dart legs enabled Lewis to complete a superb 3-2 win.

Ryan Searle and debutant Danny Lauby went toe-to-toe in an all-action first-round tie at Ally Pally with the former coming out 3-2 winner.

Searle, who reached the last 16 here last year, hit Lauby with some heavy artillery to take the opening set before the American took out 121 and 148 to level up.

Searle swept through the third set, pinning a 121 of his own to clinch it. The 28-year-old lefty from Indiana was left reeling from a barrage of Heavy Metal arrows from Searle, but he recovered to win the deciding leg of the fourth set to send a quality contest into a final-set shoot-out.

Missed darts at double cost Lauby the chance to extend the match as Searle hit D1 to seal victory. He will meet Dutchman Jeffrey de Zwaan in what should be another cracking match next.

You should be proud of the way you played under the utmost pressure from the very start. Kudos. Good luck at Q school. https://t.co/ZJRfZu1zdr

Friday afternoon at the Darts (12pm)

Ryan Murray marked his world championship debut with a battling 3-1 victory over Lourence Ilagan, to set up a showdown with world No 1 Michael van Gerwen in round two on Saturday.

Van Gerwen famously landed two nine-dart finishes against Murray in a UK Open Qualifier back in 2017, although the Scot will be hoping to avoid a repeat result this time around.

Japan’s Edward Foulkes enjoyed a dream Alexandra Palace debut as he recorded an emphatic 3-0 victory over Belgium’s Mike De Decker to set up a meeting with Brendan Dolan for a place in round three.

Foulkes came to the capital as an unknown quantity, but he produced a fine display to prevail with a 91 average and 50 per cent on the doubles.

Friday evening at the Darts (6pm)

Foulkes’ compatriot Toru Suzuki didn’t enjoy such fortune, after he was left to rue missed opportunities in a straight sets defeat to Madars Razma.

Razma’s progression wasn’t as comfortable as the scoreline suggests, with Suzuki squandering nine darts at double to win the opening two sets.

The Latvian only registered two 140’s throughout the contest, but having opened up the third set decider with a majestic 171, he sealed his progression with a 14-dart hold to set up a clash against two-time world champion Gary Anderson.

You won’t miss a dart this Christmas thanks to the dedicated Sky Sports Darts channel all the way until January 4 with every session from the World Darts Championship, including the final on Sunday, January 3. Check out daily Darts news on skysports.com/darts, our app for mobile devices and our Twitter account @skysportsdarts