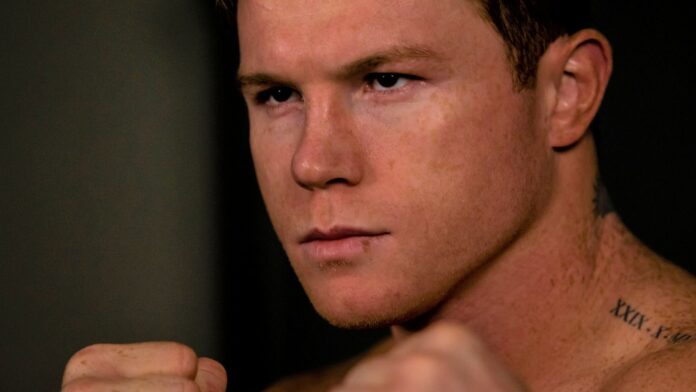 Canelo on Callum Smith: “Taking this fight is a risk. I’m fighting the No 1 at 168lbs, so these are challenges for me”; Britain’s world champion battles the Mexican star for the WBA and WBC super-middleweight titles

Saul ‘Canelo’ Alvarez says he is taking a risk against Callum Smith, who warned that he could pursue a ‘spiteful’ knockout in their world super-middleweight title fight.

The Mexican star battles Britain’s WBA ‘super’ champion, with the WBC title also at stake in San Antonio, in the early hours of Sunday morning.

Smith is regarded as the world’s best fighter at 168lbs after winning the World Boxing Super Series and Canelo has acknowledged the threat posed by the Liverpudlian, who will have a significant size advantage.

“Yes, I like risk. I like taking risks,” said Canelo at the final press conference. “Taking this fight is a risk.

“Yes, we do know that he is tall. We also know that he has great boxing qualities, so that makes him dangerous, but with my experience and the level of my boxing, we’re ready for this and to continue making history, and taking risks like this. This is what I’m here for.”

Canelo is a four-weight world champion, who has only suffered a solitary defeat to Floyd Mayweather in 2013, but the undefeated Smith believes he is capable of producing a stunning knockout win.

I’m always ready, I’m quite spiteful when I get someone hurt and this is exactly the same. I’ve got to treat Canelo Alvarez like any other fighter.

“I believe if I dominate, I win rounds well. I believe I get a fair share of the judges,” said Smith. “But every fight, I always go in and stick to the tactics and if I do land, I’ve got the power to hurt anyone in the world and I believe I’m a good finisher.

“Over the years, I’ve always got rid of people when I’ve hurt them, so the tactics are always the same for me. I’ll never go in guns blazing, swinging for a knockout, but it’s always there in the back of my mind.

“I’m always ready, I’m quite spiteful when I get someone hurt and this is exactly the same. I’ve got to treat Canelo Alvarez like any other fighter. I’m a world champion and I believe in my own ability. I believe I can beat anyone.”

GGG also back in action

Gennadiy Golovkin is yet to receive a third fight with Canelo and will instead defend his IBF middleweight title against unbeaten Polish challenger Kamil Szeremeta on Friday night in Los Angeles.

The Kazakh star returns to the ring following a unanimous decision win over Sergiy Derevyanchenko last October, while Szeremeta extended his perfect record to 21 victories in the same month with a stoppage of Oscar Cortes.

Golovkin suffered the first defeat of his professional career on points to Canelo in 2018, having battled to a draw with the Mexican star in their first fight in 2017.