Home Sport Fury questions: Why didn’t AJ call me out? 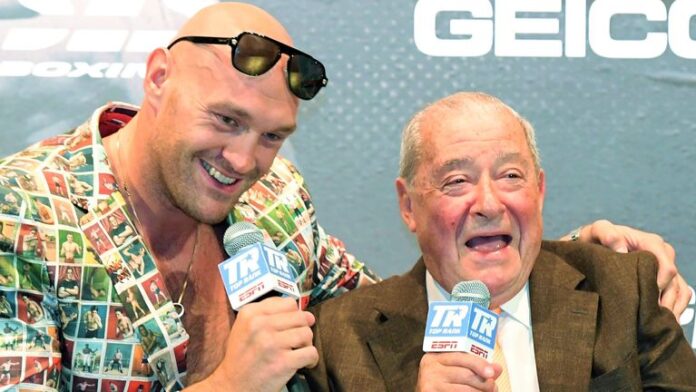 Tyson Fury: “When I beat Anthony Joshua next year, I’ll have beaten the best from the last era and my era”; WBC champion questions why AJ didn’t call him out more forcefully but adds that the dream match-up will happen next year

Tyson Fury has criticised Anthony Joshua for not being vocal enough about their proposed super-fight which he says “has to happen”.

Joshua retained his IBF, WBA and WBO titles against Kubrat Pulev last Saturday then said about the WBC belt: “Whoever has got the belt, I would love to compete with them. If that is Tyson Fury, let it be Tyson Fury.”

A fight between Joshua and Fury, who hold every major title between them, is being discussed for 2021 to decide the undisputed heavyweight champion.

“Next year, the fight has to happen,” Fury told The Jonathan Ross Show.

“He’s come over his final hurdle last week against Pulev. And now we’re both free to make this fight. I’m willing to do the fight.

“He was asked the question: ‘Do you want to fight Tyson Fury?’

“Very plain and simple, and he never answered the question. It was a simple yes or no answer, wasn’t it?

“Then they said: ‘Do you think you’re the best heavyweight in the world?’

“And he went [holds hands up]. Didn’t answer the question. Ask me: ‘Do you want to fight Anthony Joshua?’

Fury insisted he was the division’s No 1: “Me, by a mile. There we go, that’s how you answer the question.

“He is unified champion now, I was in 2015 before my problems and I had to vacate them all. So it’ll be the first time since Lennox Lewis 20 years ago that there’s been an undisputed champion.”

Fury said about his future in the ring: “I’m a creature of habit. I’ve done this since in the womb, basically. Came out fighting, fists ready. I’ll continue until there’s no more challenges, no more proper challenges to fight.

“When I beat Joshua next year, I’ll have beaten the best from the last era and my era. So then there’ll always be someone else to fight.”

Fury added about Joshua: “He’s a great fighter, Olympic gold medallist, two-time heavyweight champion just like me, he’s won all the best, he’s a great, great athlete. Of course [I have respect for him].”

Tyson Fury was speaking to The Jonathan Ross Show which is on Saturday on ITV at 9.25pm.

What did AJ say about Fury?

Joshua said after knocking out Pulev: “I started this game in 2013. I’ve been chasing all the belts. I’ve been dealing with mandatories.

“Of course I want the challenge. It’s not about the opponent, it’s about the legacy and the belt. Whoever has got the belt, I would love to compete with them. If that is Tyson Fury, let it be Tyson Fury. It’s no big deal.

“It’s one fight at a time, picking them off one by one. That’s all it’s about for me. I’ve got to stay focused.”

Joshua’s promoter Eddie Hearn added: “There’s been a lot of talk. As he said, it’s less talk, more action. Since he came into the office, he wanted to be the undisputed champion of the world.

“I know he [Joshua] wants it. He is the best heavyweight in the world, I promise you. He’ll break [Fury] down, he’ll knock him out, but for me, less talk, more action.

“We know what we want to do. It’s about legacy and we will get it done.”

Sky Sports’ Carl Froch said: “Eddie Hearn said it, but Anthony Joshua didn’t say it. He kind of refused to say it.

“I think the only guy out there for him now is the Fury fight.

“It’s almost like ancient Rome in the Colosseum, when the crowd have spoken. The fans that follow Joshua, they want to see the Fury fight.

“He’s got Oleksandr Usyk for the WBO mandatory, that’s an option.

“There’s still question marks. Is Tyson Fury in his head, on his mind?

“Let’s see if it happens, but that really is the fight that we need to see now.”