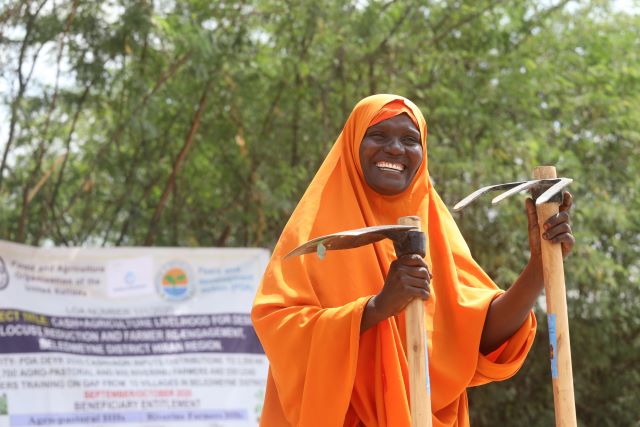 “My life depends on farming. My resource is farming, and my family sustains itself with what we farm,” says Ali Mahamud Rubaax, a farmer based in Dharkeynley village, Beletweyne district, central Somalia. “The constant challenge I face is flooding from the river as it destroys all the crops. When the flooding ended last year, we started planting seeds, but then the water came back again,” he adds.

The major economic center of Beletweyne is especially vulnerable to seasonal floods due to its low-lying location. The town is a key urban centre and commercial hub providing services to rural communities in Hirshabelle State, like the one where Ali is based.

In 2019, the river levels in Beletweyne town and its surrounding areas reached their maximum carrying capacity, leading to overflow that left most of the town under water. An estimated 182 000 people were displaced, with the majority coming from Beletweyne. Reports indicated that tens of people had drowned or gone missing.

“First the water damaged my farm twice, then the desert locusts came and ate everything. Because of the locusts, we lost everything on our farm. It became a failed season,” Ali explains.

Cyclone Pawan made landfall in December 2019, which, combined with unusual conducive weather conditions, contributed to an increase in desert locust populations in Somalia. Winds and rain are two crucial elements that caused desert locusts to multiply rapidly and move quickly to other areas of the country. Considered the most destructive migratory pest in the world, the desert locust is highly mobile and can travel with the wind up to 150 km/day.

“The first time the desert locusts came to us, we were scared because they were flying around all over. We tried different things to scare them away,” said Iraado Amir Omar, another farmer living in Dharkeynley village. “We created fires, made some noise, but still, they ate our plants and crops leaving almost nothing behind on our farms. My farm is only one hectare, but more than half of it was destroyed, even the surrounding trees and plants are gone now.”

Impact on food security and livelihoods

The vast majority of the Somali population depends on agriculture for their livelihoods. These farming and herding communities rely heavily on rain-fed production systems, with the timing, duration and quantity of rainfall playing a critical role in rangeland rejuvenation and crop production. However, threats such as the desert locust pest, create losses of up to 100 percent for both crops and fodder, with devastating impacts on food security, livelihoods and the economy.

“With the recent invasion of a new generation of desert locusts, large areas of cropland and pasture are at risk of being damaged in southern Somalia during the current Deyr 2020 season in December,” says Ezana Kassa, FAO in Somalia Emergency Coordinator. “The impact can have severe consequences for agricultural, agropastoral and pastoral livelihoods in a context where food security is already fragile.”

With the financial support of the Bill and Melinda Gates Foundation, in November 2020, FAO was able to provide agricultural inputs (cowpea, sorghum and vegetable seeds, basic tools, and hermetic storage bags) to
5 750 agropastoral farmers and their families in the desert locust-affected areas in Baidoa district, Bay region. Furthermore, an additional 2 650 households in Kuurtunwarey and Burloburto districts received complimentary fertilizer.

About 2 500 households in Beletweyne district alone received cash support to help them survive the desert locust invasion. In addition, seeds and tools were provided to improve the sustainability of their farming in the long-term.

“We have received seeds from FAO: 20 kg of maize seeds, 10 kg of cowpea seeds, 30 seed storage bags, two types of hoes, a big one and a small one for digging, and eight varieties of vegetable seeds,” says Iraado. “The seeds arrived when we needed them the most. I do not have money to buy seeds, but at least I can plant them now.”

“The help that FAO gave us is very important because our lives depend on the land,” Ali says. “I hope in the future that these seeds that I am planting will change my life and the lives of my family members.”