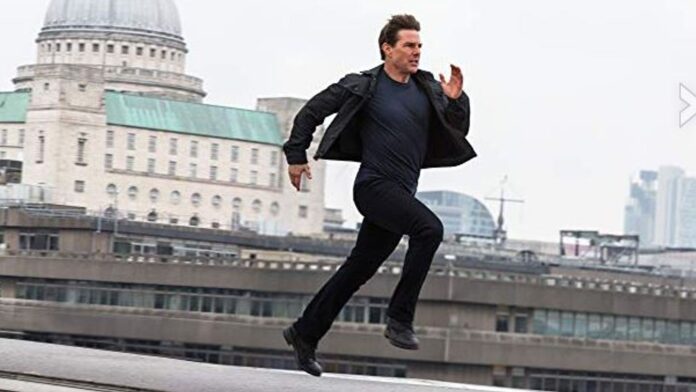 The director of the latest instalment of Mission Impossible has thanked his cast and crew, just days after a recording was released of Tom Cruise ranting at members of the production team.

Christopher McQuarrie shared a picture from the set on Instagram, writing: “To all who make the journey possible. To your loved ones back home. Have the happiest of holidays. And thank you.”

The misty image shows an imposing ramp built on scaffolding and towering high into the sky.

The set up – which is being used for one of Cruise‘s motorbike stunts in the film – is understood to be in a remote mountain valley in Norway, where filming resumed earlier this year.

Actor Henry Cavill – who starred in Mission Impossible: Fallout – was among the 7,000 people to like the post in just a few hours.

While McQuarrie did not refer to the on-set friction captured in the recording obtained by The Sun newspaper earlier this week, his positive message seemed to directly contrast that of his leading man.

In the audio, Cruise can be heard shouting and swearing at the crew for apparently ignoring social distancing rules, telling them: “If I see you do it again, you’re f****** gone.”

The 58-year-old actor also says that it is due to the action franchise that the film industry was finally getting back to work.

The angry outburst appears to have taken place after Cruise saw two employees sitting too close together at a computer screen.

Cruise has yet to publicly address the leaked recording, however, fellow actor George Clooney is among those who have publicly defended the star claiming he “didn’t overreact”.

Speaking to radio presenter Howard Stern, Clooney said that while he personally would not have singled out individuals, Cruise did have a responsibility to protect the production as a whole.

Cruise has gone to great efforts to ensure that filming goes ahead despite necessary social distancing restrictions, including reports earlier this year that he paid around half a million pounds to hire cruise ships to house the production crew in Norway to keep them safe.

McQuarrie, who has been confirmed as the director of the next in the franchise too – Mission Impossible 8 – signed off his post with the hashtag #MI7MI8.

Both Mission Impossible films are understood to be being filmed back-to-back, despite numerous delays due to the coronavirus pandemic.

The shoot is now back in progress at Warner Brothers Studios in Leavesden, Hertfordshire.

Mission: Impossible 7 is due for release in UK cinemas in November 2021