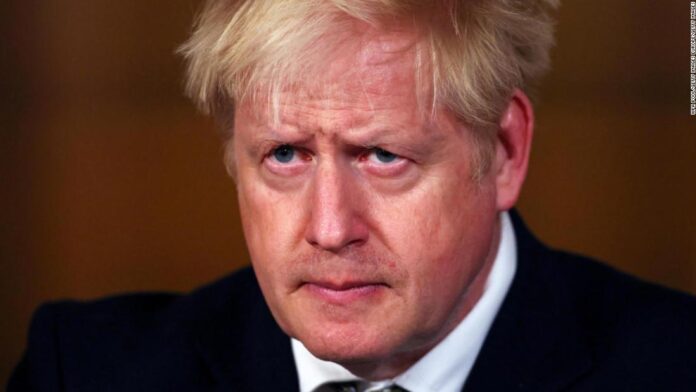 As Brits wind down for the Christmas break and look forward to the end of a horrendous year, the country will live in real time the consequences of policy decisions Johnson has taken in the face of the two greatest post-war crises the UK has faced: coronavirus and Brexit.
Both issues are politically hellish for Johnson. On Covid, his own Conservative party has vocally opposed his government’s approach for being too restrictive. This forced the Prime Minister to relax rules over the Christmas period, allowing families to meet for five days, despite the fact the UK appears to be heading towards a third spike.
On Brexit, hardline Euroskeptics have cranked the pressure up on Johnson not to sell them out at the last minute. This has forced the PM to create the impression that he is willing to take talks with the European Union right down to the wire, a strategy that means no one has a clue what happens at the end of the transition period on December 31.
Critics have accused Johnson of abdicating leadership and adopting vague positions on both in order to keep his party in line. And while this might seem a politically sensible bit of party management, the stakes are unbelievably high. Historians in years to come may view this period as the nadir of his leadership, depths from which he may struggle to recover.

Christmas plans in the balance

Earlier this week, Johnson found himself under fire after two bizarre performances in which he delivered confusing advice as to what people should do over the Christmas break. First, he accused Keir Starmer, who leads the opposition Labour Party of wanting to “cancel Christmas” unlike Johnson, who previously permitted three households to gather for a five-day period.
However, at a press conference later that day, he added a major caveat. Flanked by his scientific advisers, he said it was vital “everyone exercises the greatest possible personal responsibility,” advising that his rule of three households and five days “are maximums, not targets to aim for.” In his particularly Grinchy closing remarks, Johnson wished the nation a “merry little Christmas … And I’m afraid this year I do mean little.”
Reasonable people could be forgiven for feeling angry that, having being promised some brief joy at the end of a dreadful year, they were now being asked to make their own risk assessments, rather than being told what to do by the government.
And the danger is real. “Christmas has all the ingredients for super-spreading,” says Christina Pagel, director of the Clinical Operational Research Unit at University College London.
“Add to that the fact that schools are open and the virus is in schools. The only way it would be safe for kids to see grandparents would be if they and their families had at least 10 days to isolate (and preferably 14), which obviously there isn’t the time to do now,” she adds.
Johnson’s attempt to appease all sides of his party appears to have instead enraged everyone. “He needs to show stronger leadership to the country, and frankly to his parliamentary party too,” says a former senior Conservative adviser, who spoke on the condition of anonymity. “[The public] won’t forgive him when their grandparents are dead because the government wasn’t strong enough to recognize that ‘personal responsibility’ is not enough under circumstances like these.”
Unfortunately, the PM’s halfway house went down no better with those who think people should be left to decide for themselves what’s best to do. Many of his MPs are very unhappy that Johnson offered the public a glimmer of hope to make their own decisions, only to then offer a finger-wagging series of warnings ahead of the Christmas break.
Asked to comment on criticism that the PM had failed to give leadership on both Christmas meetings and Brexit, a Downing Street spokesperson said: “As the PM has said, banning Christmas would be inhuman and we do not want to criminalize plans people have made for some time. We want to balance pragmatism with the overriding priority of protecting public health.”
They added: “The safest way to spend Christmas is with your own household or support bubble in your own home — and we strongly recommend this is what you do if possible.”

The impact of Christmas gatherings will be unclear for a few weeks, unlike Johnson’s other big headache: Brexit.
The fact that negotiations have gone on so late means that even in the event of if a deal is reached in the coming days, businesses have next to no time to implement new measures if they are to carry on trading with the EU. And the secretive nature of the negotiations has meant that traders have been driving towards a metaphorical cliff edge with their headlights off.
“It’s very hard to predict what is going to happen on the ground and that is what companies are most worried about. You can have something on paper in a deal but the situation on the ground could be very different from country-to-country,” says Allie Rennison, head of EU and trade policy at the Institute of Directors. “We needed plans in place so that whatever happens, there was a good period of time for business to understand whatever had been agreed, but there are now impossible time constraints on that,” she adds.
If the situation on the ground is chaotic, with lorries stuck at borders, goods not flowing, shortages of foods and medicines, or any other major disruption, Johnson is in serious trouble.
“It’s true that taking the EU to the wire was a necessity for Johnson. It both proved to his party he was serious about negotiating hard and probably helped get a better deal out of the EU,” says Tim Montgomerie, who served as an adviser to Johnson until 2019. “However, there isn’t much time and that, for businesses, is ridiculous. All the game-playing should have come ahead of when he first said he was going to walk away in October.”
Given that Johnson’s Conservatives have traditionally been the party of business, this could be politically catastrophic in the long run. “For some companies, disruption is deadly as you can lose customers quickly. If a supermarket chain suddenly decides it’s too much hassle to deal with British companies and can source things more easily elsewhere, they might never get that customer back,” says Rennison.
Johnson might not know it, but his attempts to navigate a narrow political path could backfire spectacularly.
“For someone who professes to take such a great interest in history, he doesn’t seem right now to be thinking beyond the coming weeks and how it might reflect on him,” says Tim Bale, professor of politics at Queen Mary University London.
“It’s clear that his government’s mixed message on Christmas is going to cost lives and it’s possible that has been baked in: when 65,000 people have already died, what’s another few thousand? But my goodness it’s a risk,” Bale adds.
“On Brexit, once businesses know what is going on it will be fine. But if it goes wrong, people will remember those weeks where things were awful because no one had enough time to prepare.”
Johnson’s had a torrid time since entering Downing Street. Amazingly, he’s thus far not been affected too badly in opinion polls.
However, there are four years left for the consequences of his actions, inactions and poor party management to catch up with him before the next scheduled general election. And if both Christmas and Brexit are catastrophic disasters, there is a good chance his party might decide Johnson isn’t the man they want to fight that vote in 2024.