Home Sport India’s collapse – the chaos in numbers and tweets 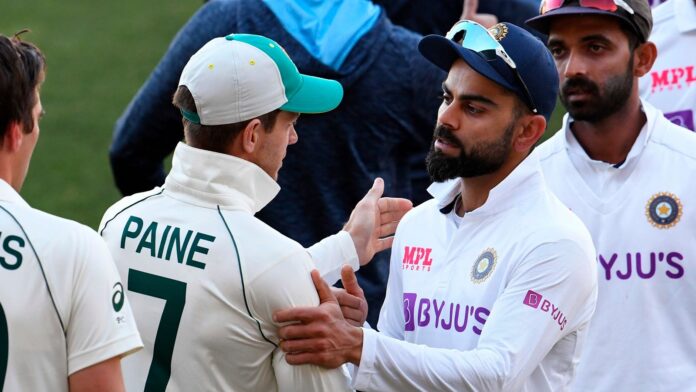 India bundled out for only 36 by Australia in Adelaide as Virat Kohli’s side record their lowest-ever Test score; no batsman makes double figures as Josh Hazlewood and Pat Cummins run riot; Shane Warne and Michael Vaughan among those to react on Twitter

India had a scarcely believable batting meltdown as they subsided to their lowest-ever Test score during an eight-wicket defeat to Australia inside three days of the day-night Test in Adelaide.

No batsman made it past nine as Australia pacemen Josh Hazlewood (5-8) and Pat Cummins (4-21) ripped the tourists to shreds in a stunning display with the pink ball which provided some quite stunning stats – albeit not ones India will wish to look at in a hurry!

36 – India’s lowest-ever Test score. The total knocking the 42 they were razed for by England at Lord’s in 1974 into second place on that chart. England’s Chris Old (5-21) and Geoff Arnold (4-19) played the Hazlewood and Cummins roles respectively for England in that game, with Eknath Solkar the only India player to make double digits

4 – only four teams have recorded worse Test scores than India. New Zealand all out for 26 against England in Auckland in 1955, followed by South Africa three times. The Proteas skittled for 30 by England in Port Elizabeth in 1986 and at Edgbaston in 1924, and for 35, also by England, in Cape Town in 1899

1 – India’s innings was the first time in Test history that all 11 batsmen and extras could not make double figures, with Mayank Agarwal the best of a bad bunch with nine. No South Africa batsman made double figures when they were rolled for 30 by England at Edgbaston in 1924 – but extras did add up to 11

25 – the number of deliveries it took Hazlewood to complete his five-wicket haul as he dismissed Agarwal, Ajinkya Rahane, Wriddhiman Saha, Ravichandran Ashwin and Hanuma Vihari. The fastest five-for from the start of a spell is 19 balls, achieved by Australia’s Ernie Toshack against India in Brisbane 1947 and equalled by Stuart Broad for England against Australia at Trent Bridge in 2015

8 – the number of runs conceded by Hazlewood in his five-wicket haul. Only Toshack (5-2) in that game against India in 1947 and Bert Ironmonger (5-6) against South Africa at Melbourne in 1932 have conceded fewer runs for Australia when taking five wickets

Okay, there was one stat Agarwal might be relatively happy with!

19 – the number of innings for Agarwal to reach 1,000 Test runs, the third-quickest for India to the milestone. Vinod Kambli and Cheteshwar Pujara are the only two players to beat him, achieving the landmark in 14 and 18 innings respectively

Wow!! What a bowling display that was from Pat Cummins & Josh Hazlewood here in Adelaide. Just outstanding. Have to feel for the Indian batsman as never saw that coming – it was one of those days where the batsman nicked everything & didn’t play and miss at all ! Unbelievable…

This is some of the finest line and length bowling you will see. Forcing the batsmen to play in that uncomfortable corridor and doing just enough.

36 – India have compiled their lowest total in a men’s Test innings (36); in addition, it is also the joint-lowest team total in the format on Australian soil (also 36 by South Africa v Australia, February 1932 in Melbourne). Nadir.#AUSvIND pic.twitter.com/EDUtgsqOop