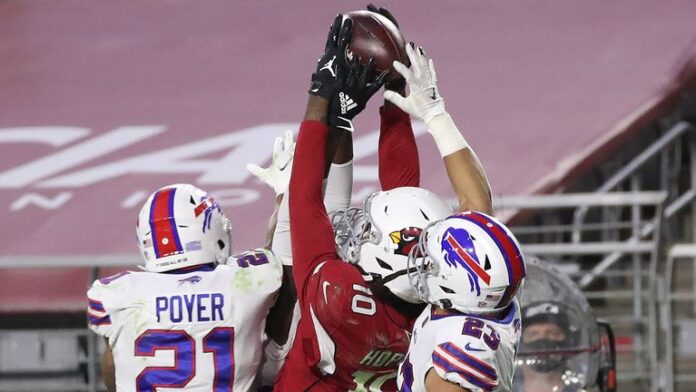 “The Bills conversation has gone from ‘they’re a playoff team’ to ‘they could be a legit Super Bowl contender'”; watch Buffalo Bills @ Denver Broncos, live on Sky Sports NFL from 9.30pm on Saturday

The Buffalo Bills are the “real deal” and set to be a “major player” in the AFC playoffs, according to former NFL quarterback Chris Simms.

The Bills are 10-3 on the season – currently occupying the No 3 seed in the AFC – after winning six of their last seven games, including most recently an impressive 26-15 win over the Pittsburgh Steelers (11-2).

The Bills travel to the Denver Broncos on Saturday night – live on Sky Sports NFL from 9.30pm – and Pro Football Talk‘s Simms thinks they are a “top-five team in the NFL”.

“Buffalo are trending upwards, to where every week we look at them and go ‘this is a real deal team’,” said Simms.

“They showed again [against the Steelers] that they are capable of winning games in different ways.

“I feel like they lost those games to the Titans and the Chiefs [in Week Five and Six] and they went, ‘we’re not where we thought we were quite yet’ – not quite in that class of the AFC.

“Ever since then, it has been really good football. They’ve only lost on the ‘Hail Murray’ to the Cardinals, and they’ve beaten other good football teams along the way.

“They’re showing that they’re battle-tested. And they’ve got a quarterback that is elite.

“It doesn’t always have to be a Josh Allen 350-yard air show; it’s a well-rounded football team and I think they’re a major player.

“They’re an official top-five team in the NFL – I don’t expect them to fall off from that in the month of December – and they’re going to make some noise in the AFC playoffs.

“The Bills conversation, over the last few weeks it has gone from ‘they’re a playoff team’ to ‘they could be a legit Super Bowl contender’.”

One of the biggest reasons behind the upturn in the Bills’ fortunes has been the offseason arrival of wide receiver Stefon Diggs via a trade from the Minnesota Vikings.

Diggs leads the league in receptions in 2020, tallying 1,167 receiving yards and five touchdowns as he has developed a brilliant understanding with quarterback Allen.

“Diggs is phenomenal,” Simms added. “He is one of those guys where there is no weakness to his game; he is a well-rounded receiver.

“He can do the ‘over the middle’ Julian Edelman, Wes Welker stuff, he’s also a game-changer in that you can line him up outside and say ‘go’, turn on the after-burners and run by that guy. He will command double-teams at times, and he has a great feel for the game.

“He fits schematically within their system but, also, when you’ve got a superfreak like Allen, who is going to run around and make plays, Diggs all the time seems to be the guy on the end of those.

“He has a great feel for where Allen wants to go. It’s a tough combination to stop those two.”

Watch the Buffalo Bills at the Denver Broncos live on Sky Sports NFL from 9:30pm on Saturday night.