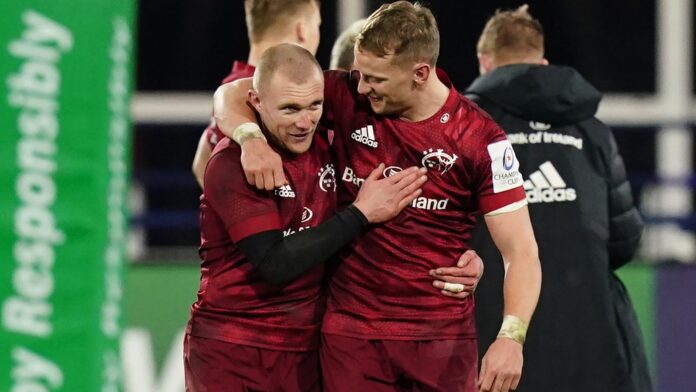 Clermont looked to be cruising to victory after opening up a 28-9 lead in the first half, however Munster showed their pedigree by scoring 30 points to record a famous victory at Stade Marcel Michelin

Munster overturned a 19-point deficit to claim a famous 39-31 victory over Clermont Auvergne in France.

Johann van Graan’s men became only the second side to earn a Heineken Champions Cup triumph at Stade Marcel Michelin to continue their unbeaten start to the season.

The French side looked en route to a bonus-point win following a blistering start which brought them tries from Alivereti Raka, Damian Penaud, Etienne Fourcade and a penalty try inside the opening 25 minutes.

But 24 points from the boot of JJ Hanrahan and scores from Mike Haley and CJ Stander completed a remarkable fightback to put Munster on course for the knockout stages, before Kevin O’Byrne sealed one of the province’s greatest European nights.

Clermont, seeking a 32nd win in 33 home matches in the pool stage, powered into the lead after only 26 seconds.

Keith Earls spilled the kick-off into the hands of second-row Peceli Yato, who produced a fierce hand-off on Gavin Coombes before he offloaded to Raka.

The France international charged onto the ball and crossed the line unchallenged to score, and Camille Lopez converted for a 7-0 lead.

Munster outside-half Hanrahan steadied the ship with a penalty, but another error from the restart compounded their dire start.

After a succession of attacks around the ruck, Lopez looked to exploit the overlap to send Penaud in at the corner, only to be denied by a desperate Shane Daly.

The winger deliberately knocked the ball on to deny a certain try, but his actions resulted in a penalty try and 10 minutes in the sin-bin to tarnish his European debut.

The French side made their man advantage pay after Hanrahan had added a second penalty for Munster.

Lopez shifted the ball to the outside where Raka looped a long pass to Penaud, who strolled in at the corner, and Lopez added the extras to make it 21-6 after only 15 minutes.

Hanrahan was on target again to chip away at the lead, but Clermont secured the bonus point after 25 minutes when Fourcade fed a lineout and latched onto the rolling maul to score.

Lopez converted again and at 28-9 the result looked to be secured, but Munster gave themselves a glimmer of hope when Haley scythed through to score.

Hanrahan converted to cut the gap to 28-16 at half-time.

The returning Munster No 10 then narrowed the deficit to six points with a pair of penalties after the restart as the Irish side edged their way back into the contest.

The lead was down to three after 57 minutes thanks to a sixth Hanrahan penalty after Judicael Cancoriet was sin-binned for a no-arms hit on Munster hooker Rhys Marshall.

Lopez restored the six-point lead with a penalty of his own, but Thibault Lanen opened the door for the visitors again when he saw yellow for pulling Tadhg Beirne at a lineout.

And this time they took their opportunity to complete the comeback as Stander barged over at the back of a maul after a five-metre lineout, and Hanrahan held his nerve to convert and make it 32-21.

Replacement hooker O’Byrne then sealed the unlikeliest of victories when he crashed over late on, with Hanrahan maintaining his perfect record off the tee to secure a 39-31 win.