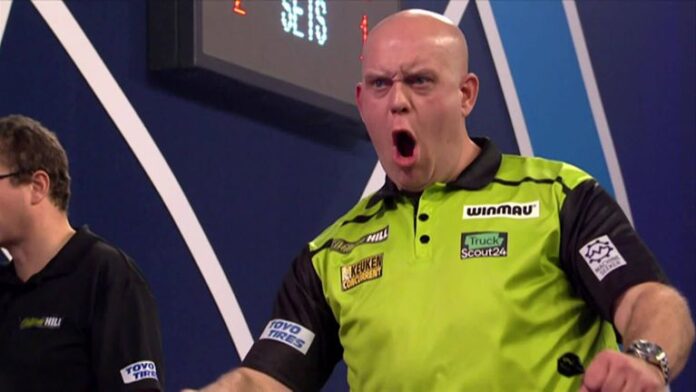 Michael van Gerwen too strong for Ryan Murray at Alexandra Palace, while Deta Hedman suffered 3-1 defeat to Andy Boulton; coverage continues on Sunday with another double session getting under way from 12pm on Sky Sports Darts

Michael van Gerwen beat Ryan Murray to kick off his to bid to win a fourth World Darts Championship, while Deta Hedman’s debut ended in disappointment at Alexandra Palace.

Three-time champion Van Gerwen has reached the semi-finals in seven of the last eight years and, having suffered defeat to Peter Wright in the final last year, he started in style to defeat Murray 3-1 with the highest average of the tournament so far.

‘MvG’ has won ‘just’ five events so far this season, but he was triumphant in the most recent tournament, the Players Championship Finals and he continued where he left off in that event.

Only Phil Taylor, Eric Bristow and Raymond van Barneveld have won more than three world titles, and, despite a below-par season by his own standards, Van Gerwen is still the man to beat in north London – and he underlined why with a 108.98 average.

Three 15-dart legs and a 100 average saw him claim a quickfire opening set against his 33-year-old opponent – who was on the end of two-nine dart legs in the same match when the pair met three years ago on the Pro Tour.

Murray had impressed in beating Lourence Ilagan in the first round on Thursday and he was at it again as a 130 finish and some clinical check-outs as he defied a 109 set average from MvG to level the match.

But Van Gerwen was not to be denied. Despite some fine arrows, and superb finishing from Murray, MvG powered to the finish line, averaging 113 to win the third set and 111 to win the fourth set – but only after Murray had missed darts to take the match into a decider.

Deta Hedman’s PDC World Championship debut ended in defeat, as she bowed out following a 3-1 first-round loss to Andy Boulton.

The 61-year-old post office worker, a three-time women’s World Championship runner-up, was determined to enjoy her moment on the Ally Pally stage after a lifetime in the sport and in doing so became the sixth woman to play in the tournament.

Hedman fired in the first maximum of the match in the opening leg but the woman known as ‘The Heart of Darts’ threw away five darts for the first leg as nerves got the better of her, which allowed Boulton to claim a 1-0 lead.

Hedman’s darting pedigree is not in doubt and, having come through the inaugural Women’s Series behind Lisa Ashton, she ensured history was made joining her brother Alan in becoming the first brother and sister to feature in the PDC World Championship.

Boulton moved into a 2-0 lead before Hedman stirred into life and produced a brilliant third set to raise hopes of a barnstorming comeback. Having struggled with her doubling, she hit three of her four darts at the outer ring to get a set on the board.

However, there was to be no further history made as 16 years on from becoming the first woman to beat a man in a TV major, she was unable to complete the fairytale as Boulton composed himself and averaged 104 to win the three legs he needed to book a meeting with Stephen Bunting.

Scotty eventually too hotty for Campbell

Scott Waites roared ‘Bring on Nathan Aspinall’ after coming through a spectacular Saturday afternoon clash with Canada’s Matt Campbell, thanks to a last-leg decider.

“I owe Nathan (Aspinall) one anyway. I missed four darts last time I played him, so come on Nathan – let’s have a decent game lad. I’m waiting for you mate,” said Waites after his 3-2 win which featured a string of match-saving finishes.

Campbell seized the initiative in the first set, but could never shake off Waites, the two-time BDO world champion who is making his Alexandra Palace debut having secured his Tour Card in January.

Waites produced a series of ice-cool finishes with Campbell poised to win the match, getting over the line in the 25th leg as every set went the distance

He said: “I was never in front in that game, no matter what I did. I tried my best to get in front of Matt. I couldn’t do it and then it all came down to that last leg, and what a leg that was.

“You get enthralled in the game that much that you don’t know what is going on around at the side of you or the back of you. If there was a crowd in here, I wouldn’t hear it anyway.

The pair shared 12 maximum 180s and five 100+ finishes in a thriller that showcased both men’s credentials, with Campbell set to head to Qualifying School in January.

Mervyn King and Kim Huybrechts served up reminders that they will not be any pushovers – coming through their first action of this year’s tournament.

Huybrechts produced the benchmark for the tournament so far with a 3-0 demolition of China’s Di Zhuang, who was only afforded four darts at double, all of which went begging.

The Belgian has not reached the quarter-finals since his debut in 2012 but he averaged 104 and hit five 180s on his way to a second-round date with 10th seed Ian White, who has not gone beyond the second round in each of the last three years.

After ‘The Hurricane”s stellar efforts, King looked like bettering his average for much of an entertaining duel with Germany’s Max Hopp.

Having stormed into a 2-0 lead, King was pegged back by a resilient Hopp, who claimed the third set. However, King held his nerve in a high-class fourth set to prevail and move into a mouthwatering showdown with Grand Slam of Darts champion Jose De Sousa.

Merv king is just such a great dart player. I’ve seen it first hand practicing with him a lot for a few years. He’s just so so rarely poor, always hard too beat, credit too him, his longevity is incredible.

Steve Lennon moved into the second round and a showdown with Devon Petersen after a classy 3-1 victory over Sweden’s Daniel Larsson, and he was joined in first-round victories by Niko Kurz and Danny Baggish.

Kurz saw off 2012 runner-up Andy Hamilton, who was making his return to Alexandra Palace, and will now take on fellow German Gabriel Clemens, while ‘The Gambler’ Baggish caused a minor shock by beating the rapidly-emerging Damon Heta in a last-leg shoot-out after Heta had fought back from 2-0 down thanks to four huge finishes.

Don’t miss a dart this Christmas thanks to the dedicated Sky Sports Darts channel all the way until January 4 with every session from the World Darts Championship, including the final on Sunday, January 3.