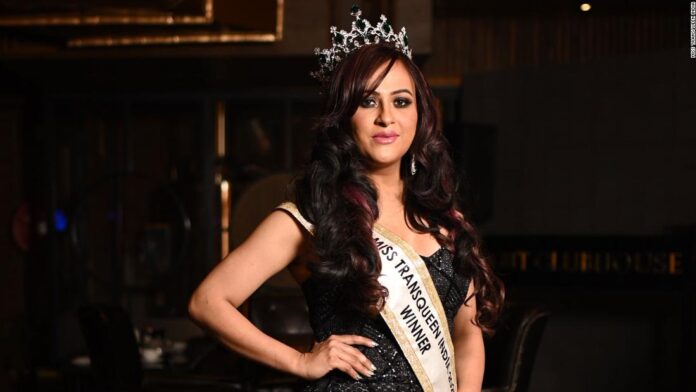 India has a new Miss Transqueen — and she’s headed for the world stage, determined to speak out for the country’s marginalized transgender community.

Miss Transqueen India was first established in 2017, and involves all the trappings of a traditional beauty pageant — photoshoots, talent rounds, elaborate costumes, judges and hundreds of audience members.

This year, organizers were unable to hold the competition due to the pandemic, which prompted a national lockdown from late March to May. But Reena Rai, chairwoman and founder of Miss Transqueen India, wasn’t ready to give up; she was determined to send a contestant to represent India in the 2021 international pageant.

“My pageant isn’t just about beauty, it is about empowerment and inclusion,” Rai told CNN in a phone interview. “If I am going to send someone without holding a competition, then I have to make sure that they are a very strong candidate, the best of the best, someone who knows the value of (becoming Miss) Transqueen India.”

Soni seemed like the obvious choice; as a fashion designer and stylist whose work is known on the pageant circuit, she has previously helped coach contestants and pick their outfits. For years, she stayed relatively quiet about her own transgender identity while struggling for acceptance from her family and friends — but Rai encouraged her to step forward for the title.

“She has always been a very strong backbone for Transqueen India,” said Rai. “I told her that because you’ve been with us and how important it is, and because you have been struggling with publicly coming out, this might be the best platform to do so because it is something that a lot of people will draw strength and inspiration from.”

From bullied child to pageant queen

While Soni was born biologically male, she identified as a girl from a young age — and was confused and dismayed when people around her began insisting she was a boy, and told her to act and behave like one.

As she grew up, she faced increasing pressure from relatives and friends who would discourage her from growing her hair long, wearing “girly” clothes, or having “effeminate” mannerisms, she said over the phone. “With so much pressure and bullying around me, I desperately felt I was different and that there was a problem in me.”

She found some relief when, as a teenager, she began researching and stumbled upon information about gender identity and gender confirmation surgery. She ended up leaving home at 17, pursuing an education in fashion, and transitioning with hormonal therapy a few years later — a process that she described as “difficult.”

“A lot of my friends gave up on me, they could not understand,” she said. “But I was very determined, so I went ahead and did everything on my own.”

Soni never officially came out to her family, but they stayed in touch after she transitioned — with a big “elephant in the room that we don’t point out.”

She graduated from the National Institute of Fashion Technology, started her own label, won a reality design show, and launched a career as a stylist — which is how she met Rai.

“When Reena approached me for Miss Transqueen India for the first season in 2017, I was always there to support her but I wasn’t comfortable coming out at that time because of family pressure,” Soni said. She helped direct the show from behind the scenes — and, at the same time, got involved in LGBTQ advocacy. Over the past few years, she and other activists in the country have campaigned for greater LGBTQ representation and accurate information in school curricula and textbooks.

All the while, there has been increasing conversation about LGBTQ issues, and specifically transgender visibility worldwide. This year alone, Soni watched two high-profile stars come out as transgender — actor Elliot Page, star of “Juno” and “The Umbrella Academy,” and makeup artist Nikkie de Jager, better known as NikkiTutorials.

“I am in a place where I can accept this title because I have gone through so much and know how difficult it is to be where I am today,” she said. “If someone reads about me and finds comfort, I think my purpose is absolutely met.”

India’s attitudes toward LGBTQ issues are still highly conservative, and the transgender community is one of the most marginalized in the country. Social stigma is so strong that many who come out are ostracized by society, disowned by family members, or blocked access to education and jobs.

There has been some progress; India’s Supreme Court handed down a landmark ruling in 2014, giving people the right to self-identify as neither male nor female. The court issued directions to various government ministries, including adding “third gender” or “transgender” as an option in all government documents.
But physical and sexual violence against transgender people remain extremely high. According to a 2014-2015 survey of nearly 5,000 transgender people by the National AIDS Control Organization, one fifth said they had experienced sexual violence in the past 12 months.

Transgender assault victims have reported some police not taking them seriously or brushing off their cases. Even if a case does make it to court, the sentence for rape or sexual assault is often lighter when the victim is transgender, compared to a cisgender woman.

Harmful stereotypes in entertainment and media further perpetuate public distrust and stigma. Just this year, critics slammed a movie depicting a protagonist possessed by a vengeful transgender ghost, arguing that it reinforced discriminatory stereotypes of trans people as predatory or associated with supernatural evil. It’s just the latest of a long history of Bollywood films that both mock and vilify trans people.

This is the environment Rai strove to change when she launched Miss Transqueen India in 2017. She identifies as cisgender, but grew familiar with the LGBTQ community after meeting transgender people.

“People mock them for wearing red lipstick or putting on stilettos…I wanted to create a platform where people would applaud them for wearing red lipstick and putting on stilettos.” she said. “I wanted to create an awareness that all they need is a platform, and that they can do anything like all the rest of us, if they are given the chance.”

She faced backlash almost immediately. The pageant couldn’t attract any sponsors or designers, and she recalled some designers telling her they wouldn’t provide clothing because “once a transgender woman wears it, normal girls won’t wear it.” Others couldn’t understand why she was involved in advocacy if she wasn’t transgender herself. It was so difficult that Rai said she went bankrupt and had her house mortgaged while organizing the pageant during its first year.

But, with Soni and other supporters by her side, the show went on — and now, is on its fourth year running. Last year, they even invited university and high school students to watch the pageant, hoping to teach younger generations about the LGBTQ community.

This year might not have the glamorous pageant competition and multi-day events of previous years, but Rai and Soni are looking toward the future, and their vision of a more accepting India. They hope the pageant and their advocacy work can help pave the way, and influence how the world sees India’s LGBTQ people.

“It is not just about me — it gives me the opportunity to hear the stories of those who have felt unheard for years and can’t be vocal about what they feel,” said Soni. “I can be a voice for them.”