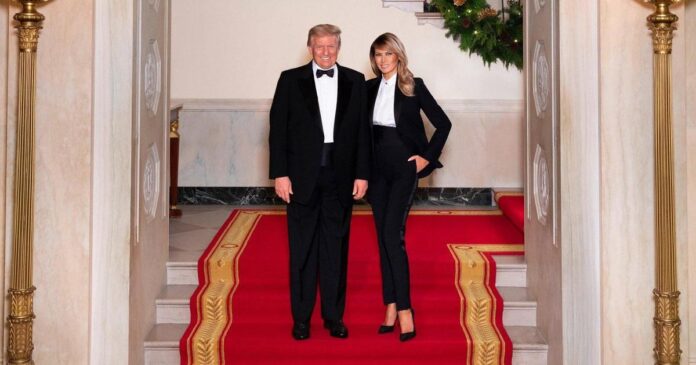 The photo shows the couple smiling in their matching looks on a red carpet. Mr. Trump is sporting a traditional bow tie, while the first lady donned her signature stilettos.

According to the tweet, the photo was taken on December 10 on the Grand Staircase of the White House. White House photographer Andrea Hanks captured the couple for the official 2020 Christmas portrait.

This year’s portrait is a departure from 2017 and 2018, when the couple was photographed in Cross Hall, and Melania wore dresses. The Trumps did not release an official Christmas portrait in 2019.

Behind the Trumps, some of the White House seasonal decorations are visible. The first lady revealed this year’s theme, “America the Beautiful,” in late November — less than two months after secret recordings from June 2018 were aired by CNN, in which she complained about preparing for the holidays at the White House.

“During this special time of the year, I am delighted to share ‘America the Beautiful’ and pay tribute to the majesty of our great Nation,” Melania Trump tweeted at the time. “Together, we celebrate this land we are all proud to call home.”

The photo will be the last Christmas portrait of the Trumps before they leave the White House in January, when President-elect Biden is sworn into office.

The photo came as a government shutdown was averted late Friday when Trump signed a two-day stopgap funding bill, giving lawmakers until Sunday to finalize a COVID-19 stimulus bill.