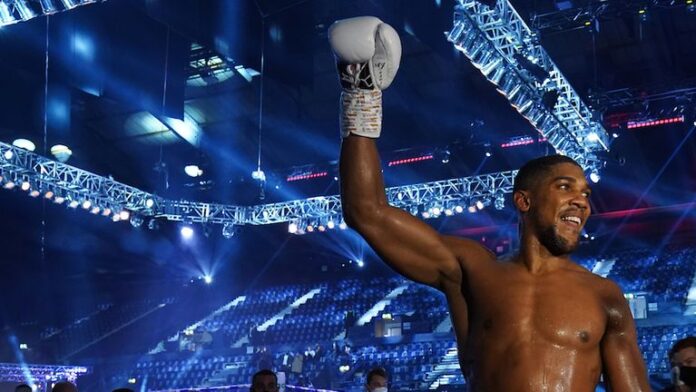 “Of course there are many countries around the world that want to stage this fight,” Eddie Hearn said; Talks have been ‘positive’ for Anthony Joshua vs Tyson Fury in May 2021 but the location is a sticking point meaning the two Brits could opt to go abroad

Anthony Joshua vs Tyson Fury could take place on foreign soil, explained promoter Eddie Hearn who said “we need a full capacity in the UK” to have any hope of the proposed mega-fight staying in the champions’ home country.

IBF, WBA and WBO title holder Joshua and WBC champion Fury have never been closer to agreeing a historic fight that would crown the heavyweight division’s undisputed champion.

The location is yet to be discussed, however, and keeping the British heavyweights in the UK will be difficult, Hearn explained.

“I think we’re all in the same position. We want to move forward with the fight, quickly as well, which is good news for fans.” 👀

“[The location] will be the next move,” he told Sky Sports News.

“Our plan, after speaking to [Fury’s US-based promoter] Bob Arum, is to get the deal in place then go out to the relevant sites.

“Obviously we all would like this fight to take place in the UK but you’ve seen London go into Tier 3 now again.

“We had a crowd on Saturday [for Joshua’s win over Kubrat Pulev] but that has been taken away for the time being. There are a lot of unknowns in that respect.

“Both fighters will have to take a significant reduction in purse for this fight to take place in the UK, unfortunately. Probably half and, without a crowd, maybe 80 per cent.

“Really, to give us any chance, we need a full capacity in the UK.

“We want to make sure this fight goes ahead for both fighters. Both camps have a responsibility to maximise the revenue for their biggest fight – this is the pinnacle of their careers, the biggest moment, nothing will ever beat it.

“At the same time, we all recognise this is two Brits fighting for the undisputed championship of the world. If there is a way to do it in the UK? Fantastic.”

Joshua fought in New York and Saudi Arabia in 2019 while Fury’s past four fights have been in Los Angeles and Las Vegas – he also beat Wladimir Klitschko in Germany in 2015.

There’s only one fight that @Carl_Froch wants to see next. 👑👑👑👑 pic.twitter.com/qpNOxnn8WM

But the early negotiations to pit Joshua against Fury have been “positive” and a fight is pencilled in for May 2021 with a rematch in November, and only a “few small issues” are still to be worked out, Hearn said.

Potential hurdles may come in the form of Oleksandr Usyk and Deontay Wilder.

Usyk is the WBO mandatory challenger and is chasing his shot at Joshua’s belt, while Wilder has entered a mediation process over a disputed third clash with Fury.

“Of course there are many countries around the world that want to stage this fight,” Hearn continued.

“It’s not only the biggest fight in boxing, it’s one of the biggest sporting events in the world.

“We will talk to everyone, present it to the fighters and their teams who will have to agree, then we move forward.

“Certainly one of the two [fights pitting Joshua against Fury] should take place in the UK.

“But is that possible in May? And where could we stage an event of this magnitude during that period?”

Rolling with the punches of Christmas shopping like… pic.twitter.com/WTN56Ze8jp

Todd DuBoef, president of Top Rank who promote Fury in the US, has previously explained to Sky Sports why the undisputed heavyweight title super-fight could be lured stateside.

“I think that the success of the big events, the biggest events in the history of combat sports, have originated from America,” DuBoef said earlier this year.

“I keep going back to that. I think the impact and the success of a PPV being distributed from the United States to the late hours, or early hours let’s call it in the UK – we’ve seen that be very successful and the fans are connected and will stay up.

“My heart of hearts tells me that would be the ideal place, but obviously we would be open to any site and any prospective dynamic that would be different.

“We’d have to weigh all the different circumstances and if there were outside locations, like Saudi Arabia, Qatar, Asia, whatever, we would obviously weigh those too.”

In January 2020 Sky Sports reported that Joshua had been offered a “huge site fee” to face Fury in Saudi Arabia.