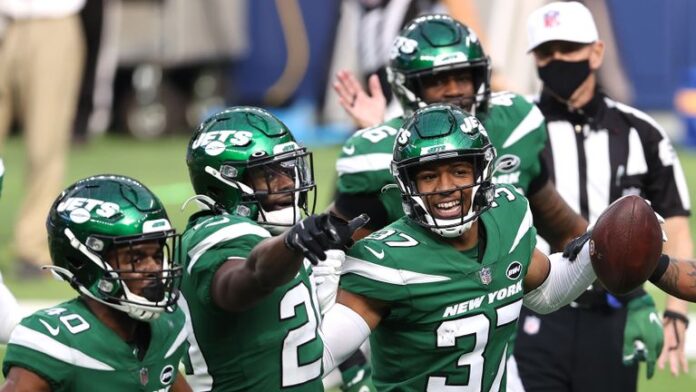 The New York Jets ended their 13-game losing streak with an upset win over the Los Angeles Rams on Sunday, but could that mean them missing out on Clemson quarterback Trevor Lawrence?

The New York Jets stopped the rot as they shocked the Los Angeles Rams to clinch their first win of the season on Sunday, but in doing so might well have lost in an even bigger way.

Adam Gase’s suffering side put an end to talk of a winless season by moving to 1-13 on the year with a victory that not only prevented the Rams from sealing a playoff spot, but also dislodged them from top spot in the NFC West.

The result, however, means the Jacksonville Jaguars, who share a matching record, have now leapfrogged the Jets into the No 1 overall pick at the 2021 Draft based on strength of schedule.

It puts them in pole position to claim Clemson’s Trevor Lawrence, who awaits as arguably the most highly-regarded quarterback prospect coming out of college since Andrew Luck in 2012.

Were both teams to lose their two remaining games, the first overall pick would be decided by a tiebreaker also based on strength of schedule.

“Hey, our job is to go out and try to win every week,” said coach Gase.

“I’m just so happy for our guys. They’ve done such a great job with how they’ve worked. It’s been too long for us to even remember what a win feels like almost. It was great to see those guys get excited.”

Lawrence, who is among the favourites to lift the Heisman Trophy, has thrown for 2,753 yards, 22 touchdowns and four interceptions so far in 2020, as well as rushing for 211 yards and seven scores.

He is set to come up against the man the Jets could subsequently turn to at No 2 overall in quarterback Justin Fields when Clemson meet Ohio State in the upcoming Sugar Bowl.

Fields has thrown for 1,521 yards, 15 touchdowns and five interceptions, alongside 274 rushing yards for five touchdowns this season.

BYU’s Zach Wilson is another quarterback candidate expected to become a top 10 pick thanks to his impressive junior year, along with North Dakota State’s talented Trey Lance.