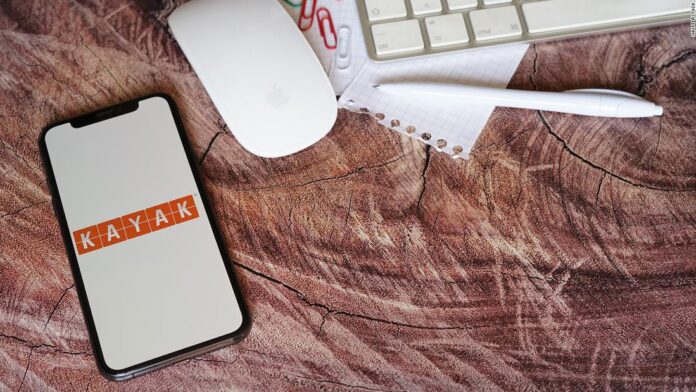 But for most of us at CNN Business, 2020 consisted of doing little and going hardly anywhere as we adapted to life during a pandemic. This meant that a lot of the technology we usually rely on became (sadly) useless, and probably won’t be necessary for months to come.
Here’s a list of what our reporters and editors looked at forlornly (and, at times, shoved into a drawer) this year, and hope we’ll put back into service in 2021.
If apps could get cobwebs, the Kayak app on my phone would look like a haunted house.
In normal times, I would check the Kayak app every couple of weeks to see what kind of deals I could get for getting out of town. This year, not so much. The pandemic has kept me in one place (I’ve only left New York state once and that was in January), so my travel apps have been as useful to me this year as a VCR.
The ironic thing is that if there was ever a year where I wish I could have used Kayak everyday, it’d be 2020. — Frank Pallotta, Media Reporter

My over-ear headphones are still sitting in my office desk, where they’ve been for roughly nine months. I have two primary uses for them: drowning out coworkers when I need to concentrate and reducing ambient noise when I’m flying. So, for me, they’ve essentially been useless in 2020.
I still use my wireless earbuds, but not for commutes since I’m working from home. Instead, they’re mostly for making work calls when I get sick of Slack and emails. — Matt Quinn, Senior Tech Editor
If I’m being perfectly honest, I was kind of ambivalent about my fitness tracker even before the pandemic. I’d keep forgetting to charge it, and when I did, I’d often forget to check it.
But I did enjoy the thrill of reaching 10,000 steps — marked by a sudden buzz on my wrist while hiking or playing tennis — and Fitbit’s sleep quality tracking was one of my favorite tech features.
That changed this year: I endured a months-long lockdown where I wasn’t walking anywhere and I knew my sleep quality was terrible. Those were the catalysts for bidding this gadget adieu. — Rishi Iyengar, Tech Reporter
In the before times I spent many of my days making calls at my desk, in an office with an open floor plan. To record these calls I used an app called Rev several times a day, which records the call and then downloads the recording to your phone. It was generally reliable, but it could glitch, and I knew if that happened I might lose the interview.
Now I work from home, and I don’t have to worry about bugging my colleagues with loud phone conversations. So I make my calls on speakerphone and record them using the voice memos app on my personal phone. This is not super efficient, but it does mean that I’m spared those few moments of panic a day wondering if my app will malfunction. — Danielle Wiener-Bronner, Business Reporter

I’ve mostly been at home since late January, when my second child was born, and for the past several months I’ve barely left the house. This makes my Nest thermostat nearly useless, as it never has anything to figure out and adjust to. Sometimes I fantasize about a future where my family will commute and go on trips and the thermostat will once again be tasked with serving us, but for now it’s set for 68 degrees, 24 hours a day. — Rachel Metz, Senior Tech Reporter
I rode in an Uber 30 times this year; February 27 was the last time I used the service. That number is down remarkably from 155 rides in 2019. I use ride-hailing apps not only to get around Manhattan but to commute to and from my local train station every day (in total, I’ve spent 191 hours being driven around in an Uber).
These apps have been collecting digital dust for months now that I’ve been working remotely. Yet while I may be going to less exciting places now — like commuting from the kitchen to the bedroom — it’s amazing how much of my life I’m getting back by not sitting in the back seat of a car. — Samantha Kelly, Senior Tech Reporter

Remember the Snapchat filter that showed when your phone battery was nearly dead? Yeah, that felt like it was made for me. I used to carry my Anker PowerCore portable charger everywhere. It’s not light, but it could charge multiple phones at once and even my MacBook. With working from home, it’s gathering dust in the backpack I also never use anymore. — Kerry Flynn, Media Reporter
RaceJoy is a fantastic app for spouses of marathon runners, like me (I’m the spouse, not the marathoner): It lets me figure out where my wife is in her interminable race and determine if I have time to schlep the children to the pizza place 10 blocks away because they’re complaining that they’re starving, yet still get back to the finish line in time to cheer for her like we were there the whole time. This year, with all races going virtual, RaceJoy sits on my phone, unopened, along with that home workout app that I’m totally going to open one of these days. — David Goldman, Managing Editor