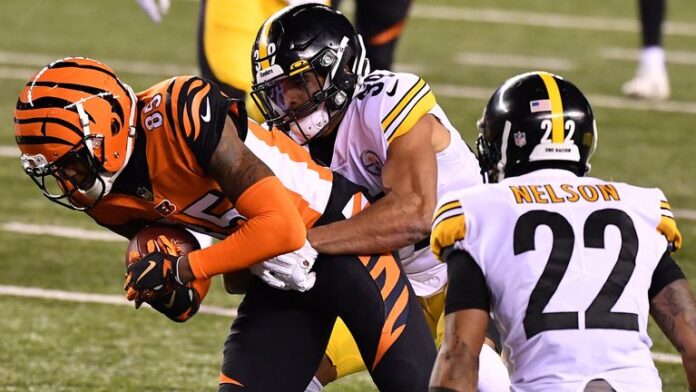 Giovani Bernard had both a receiving and rushing touchdown to help Cincinnati (3-10-1) end a five-game losing streak; Pittsburgh (11-3) missed the chance to seal the AFC North title following a third straight loss

Giovani Bernard made a touchdown reception and ran for a touchdown as the Cincinnati Bengals upset the Pittsburgh Steelers 27-17 on Monday.

Cincinnati (3-10-1) snapped a five-game losing streak, while Pittsburgh (11-3) lost its third in a row and missed the chance to clinch the AFC North title.

Bengals quarterback Ryan Finley, starting with Brandon Allen hurt, completed seven of 13 passes for 89 yards while throwing for a touchdown and running for one. Bernard gained 83 yards on 25 carries.

He threw for one touchdown and was intercepted once. Diontae Johnson had a touchdown catch while Benny Snell had a rushing touchdown among his 84 yards on 18 carries.

Pittsburgh endured a disastrous first half while Cincinnati was opportunistic.

The Steelers had two yards of offense and Roethlisberger was four of 10 passing for minus five yards in the first quarter.

The two Pittsburgh possessions that didn’t end in punts instead ended in turnovers, and the Bengals capitalised.

A botched centre-quarterback exchange was recovered by Josh Bynes and led to a 34-yard field goal by Austin Seibert for a 3-0 Bengals lead. It was Seibert’s first field goal after taking over for Randy Bullock.

Seibert was wide right on a 55-yard attempt late in the first quarter, but Cincinnati got the ball back when receiver JuJu Smith-Schuster fumbled the ball over to Vonn Bell at the Pittsburgh 38 yard line.

Seven plays later, Bernard drifted right, then cut to the endzone for a four-yard scoring run to make it 10-0 in the second quarter.

Another Steelers turnover, an interception by Mackensie Alexander, helped set up Finley’s blitz-beating, 14-yard touchdown pass to Bernard to make it 17-0.

Pittsburgh finally got on the board on Roethlisberger’s 23-yard scoring pass to Johnson at 12:27 of the third quarter, making it 17-7.

On a nine-play, 80-yard drive that bled into the fourth quarter, the Bengals pushed it to 24-10 on Finley’s 23-yard keeper.

Snell’s one-yard dive into the endzone pulled Pittsburgh to within a score at 24-17 with 5:32 left.

However, the Bengals’ Seibert added a 33-yard field goal with 12 seconds remaining to seal the win.