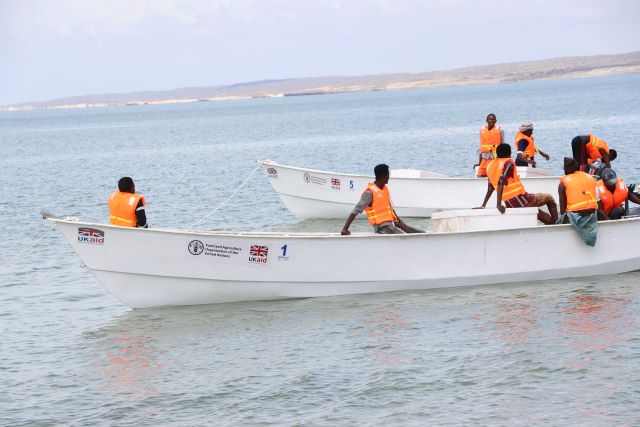 Ismail Bana Ibrahim and his colleagues set into the deep sea around 6 pm and came back the following morning with 40 kg of iced fresh fish, ready for the mainland Kismayu market. They spent longer hours fishing than they used to thanks to their newly upgraded fishing boat and gear.

Ismail is among the vulnerable fisherfolks in Jovia Island in the Bajuni archipelago, Kismayu, Somalia, who received a comprehensive fishing kit from FAO through a project funded by the Foreign, Commonwealth and Development Office (FCDO) of the United Kingdom. The project was planned and implemented together with the Jubbaland Ministry of Fisheries and Marine Resources to strengthen the resilience of vulnerable, marginalized fishing communities in Kismayu and the Bajuni Islands.

The kits provided to 700 beneficiaries each consisted of 17.5 m of locally built fiberglass artisanal fishing boat along with an outboard engine. The boat was equipped with longline fishing gear, a cold box for hygienic fish storage and other items to enable Ismail and his colleagues to fish safely and properly preserve the fish they catch. Two solar powered ice machines were also installed, one in Madhawa Island and the other in the mainland city of Kismayu. “We have strategically set up one of the ice machines in Madhawa, within the Bajuni archipelago, so that the fisherfolks and other locals can easily access it whenever they want,” says Ali Abdullahi, FAO’s national fishery officer based in Kismayu.

The initiative has helped the fisherfolks in the small Islands to properly preserve fish, while allowing them to fish for longer hours. Representatives from the island communities received six artisanal fishing boats with full fishing kits. Three of the boats were given to fisherfolks in Madhawa Island; two to those in Chula Island; and one to Jovia Island, where Ismail shares it with four other fisherfolks.

Ismail says the initiative has improved the overall fish value chain. With fishing as their main source of income, the fisherfolks in this archipelago now have enough fresh fish to not only feed their families but also to sell it in the local market. Increased availability of fresh fish in the market also means increased purchasing power to buy basic commodities like sugar and rice.

Preserving the fish caught used to be something beyond reach for Ismail and some of his colleagues. “Before the project, the fisherfolks used to travel long distances to the markets in the mainland city of Kismayu to purchase ice blocks at the expensive price of USD 3 per block,” says Ismail. “Thanks to this intervention, fisherfolks can easily access flake ice from within their camps at a subsidized rate,” explains Ali. He says that the small fee they pay to the state administration to purchase huge quantities (up to 15 kg) of flake ice is just for maintenance and security of the ice production machines. “These arrangements were discussed and agreed among all beneficiaries and in the presence of local authorities,” adds Ali.

With more than 700 beneficiaries reached, compared with 580 initially planned, the project provided them with various other inputs as well, such as fish processing packages, local market entrepreneur packages, solar chest fridges as well as different types of trainings.

The ice machine set up in Madhawa has also employed two locals, providing them with an alternative source of income to bring food to their tables. The two double as watchmen and operators. Abdirizak Abdinoor, a small-scale fish trader is one of them. Abdirizak used to wait for the fisherfolks to buy fish and sell it at the market, but “it was hard to get fresh fish, and most of the customers are poor and cannot afford to buy it,” says Abdirizak. While he still buys fish to sell at the local market from time to time, his new employment as operator of the machine allows for a more stable income he never thought he would have.

For many people like Abdirizak, the first ever ice machine in the Bajuni Islands gives new hope to the fisherfolks, the local fish traders and even the local community, creating better employment opportunities and improving their lives.

Humanitarian Visa d’Or Award: Antoine Agoudjian nominated for his story on the humanitarian consequences of the conflict in Nagorno-Karabarkh