Home Culture Backstage with… The stars and showrunner of Bridgerton 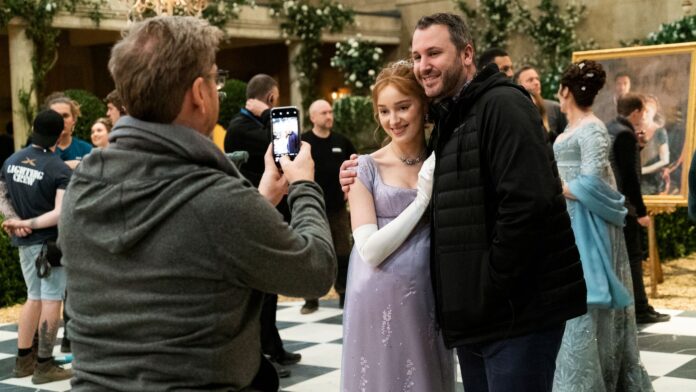 Bridgerton is the first thing to come out of Shonda Rhimes’ whopping $100m (£74m) deal with the streaming service, and expectations for the eight-part period drama are accordingly high.

Shonda Rhimes, the creator of the world’s most successful TV show – Grey’s Anatomy – has based this new drama on Julia Quinn’s best-selling novels.

But while the programme is set in Regency London, the genre is turned upside down with a queen of mixed heritage and a female gaze throughout the series.

Bridgerton’s co-creator and executive producer Chris Van Dusen – who has worked closely with Rhimes for years on shows including Grey’s Anatomy and Scandal – says that by basing the new series in a historical period, while also taking artistic licence, they’ve created something he believes will appeal to modern audiences.

“The idea really struck me because it made me wonder, what could that have really looked like? What could have happened? What could she have done? Could she have elevated other people of colour in society and granted them titles and lands and dukedoms?

“And that’s really the idea our Simon Bassett (the Duke of Hastings of the series) was born out of. It was all about a little history and a little fantasy and where they meet that intersection was really what was fascinating for me.”

Rhimes, and her production company Shondaland are revered by many in the industry for allowing diverse audiences to see themselves on screen thanks to their casting choices.

Van Dusen says that while race is a very important part of their process, he doesn’t like the term “colour-blind casting”.

“I think that the word ‘colour-blind’, it implies that colour and race aren’t considered, and I don’t think that’s true for Bridgerton.

“I think colour and race are very much a part of the show and a part of the show’s conversation, just like things like class and gender and sexuality are… At the end of the day I wanted Bridgerton to reflect the world that we live in today, and even though we’re set in the 19th century, I still wanted modern audiences to relate to it and to see themselves on screen no matter who you are.

“Having worked in Shondaland for so long, ever since Grey’s Anatomy, it’s what we do there, we cast the best actors for roles in ways that represent the world today.”

Today’s world is also represented in Bridgerton with the way the show looks at women and their relationships with men.

It’s set during debutante season where young ladies are expected to find fiances, and with the unions ultimately decided by the men in their lives.

But the show doesn’t let characters get away with the conventional portrayal of men at the time.

Jonathan Bailey, who plays Anthony Bridgerton in the drama, told Backstage: “Mr Darcy’s so attractive, so aloof and like impossibly emotionally defunct.

“There’s this idea of romanticising the male characters who aren’t present and who aren’t available and have to be taught by a women how to feel, which is something that I think we’ve continued to see.

Rege-Jean Page who plays the Duke of Hastings explains: “I think that this is a universal theme, you’re kind of bound by these false icons of masculinity, that you have to be strong all the time, you have to be dominant.

“You have to have masses of pride and hold vendettas against your dead dad, when actually we discover that strength is born out of vulnerability, out of discovering empathy, out of learning how to love other people better.

“And I think that carries through in pretty much any time period that I’ve ever worked in, so it’s nice to be able to explore that in what’s otherwise often a very traditional genre.”

“What they did in terms of championing roles for women – complicated women – on television, for LGBTQ characters, for diversity on television, they broke those boundaries, but then that made everyone else look up to them and say, maybe we could do that or we should be doing that, which everybody should be.

“And I think Bridgerton is such a great addition to this family. I feel like it feels like something very new, but also really belongs within that world, I think people will feel that when they watch it.”

Bridgerton is out on Netflix on Christmas Day, hear our review of the show on this week’s episode of Backstage podcast.