Home Lifestyle How to Make a New York Sour 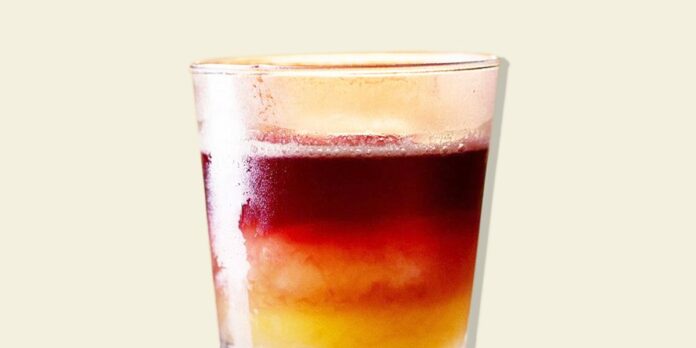 No place does it up for Christmas like New York City. And I say that fully cognizant of small town’s spattered across America, the country of Denmark, and the general North Pole region. There’s a reason in years past people fought for air pockets in the crowd at Rockefeller Center to ogle a tree or skate a few laps around a rink. Even winter alone in New York—the long woolen coats and cashmere scarfs, the holiday parties, the snowy walks through the park at dusk—is magic. They should make a movie about it or something.

So, I offer a suggestion for your holiday drinking this year: Pretend it’s a New York Christmas and make a New York Sour. (I say this even to New Yorkers in New York this Christmas; 2020 hardly, sadly, is letting us revel.) It’s a beautiful drink, what with the way the wine swirls along the surface. You almost certainly have all the ingredients already stocked for the holidays. It’s wintery, but not punch-you-in-the-face-with-Christmas-cheery, and an alternative to the gut-punishing glass of Eggnog, the medicinal Hot Toddy, and the sleeping potion that is Mulled Wine. But, it does take a key component from all three of these traditional holiday cocktails. In order, eggs, whiskey, and wine.

Get Advice on the Best Stuff to Drink, Every Day

A New York Sour is a Whiskey Sour with a red wine float—a Whiskey Sour with some color in its cheeks. The berry notes of the wine, a seasonal addition, complement the whiskey’s heat, and the egg white smooths the delivery with frothy body. Drink it fast so the egg doesn’t get…eggy. Or, for a slower sipper, nix the egg white. It’ll have sharper corners—whiskey on the nose, wine on the tail.

Bourbon or rye works well with a New York Sour; I like a higher-proof bourbon (Maker’s Mark 101, for example), but whatever you’ve got lying around. For the wine, a Côtes du Rhône or Beaujolais (“something with a backbone to it,” according to bartender Tristan Willey) is recommended, but I most recently used a $9 Cab Sav from Aldi (a price gouge by Aldi’s standards!) that was dryer than a desert, and it was great.

This cocktail wasn’t invented in New York, but it became known by the New York name, likely when a bartender in the city started mixing it up on the regular some hundred years ago. New York adopted it, just like it adopted a lot of us. It’s strong of will, and it looks more glamorous than its build would have you believe. You don’t have to sprain a wrist mixing it up on a busy Christmas Eve or lazy Christmas afternoon.

But if the bright-lights-plentiful-liquor thing doesn’t do it for you, take a look at Esquire’s other favorite cocktails for winter, for the holidays, and for New Year’s Eve. We’re full of festive drinking knowledge. Season’s greetings, and all that.