Home Sport MVG: Sacrifices are all part of the darting journey 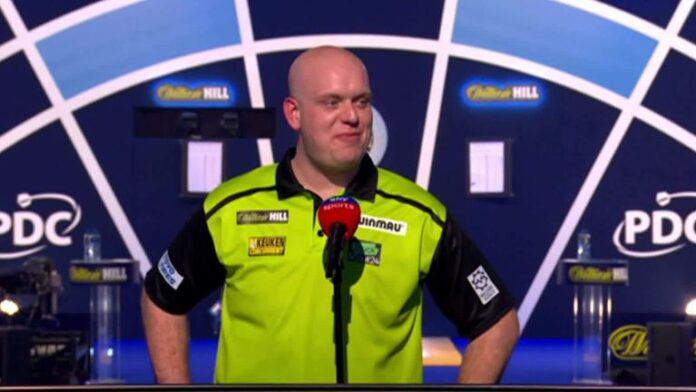 Michael van Gerwen talks to Sky Sports News’ Ben Ransom about spending Christmas next door to fellow Dutch player Vincent van der Voort in his hotel room; missing his family back in the Netherlands and targeting a fourth world crown at Alexandra Palace on Sunday, January 3

Michael van Gerwen says spending Christmas in his hotel room is the “sacrifice” he has to make as he targets a fourth world championship title at Alexandra Palace.

The world No 1 won his opening match of the 2020/21 tournament with an impressive showing against Scotland’s Ryan Murray last Saturday night.

But his plans of spending Christmas at home in the Netherlands with his wife, Daphne, his three-year-old daughter, Zoë, and baby boy, Mike Jr, were scuppered when hearing the news that UK borders were to be closed to the rest of Europe due to fears over the new Covid-19 variant.

“I drove home (to the Netherlands) at 5.30 in the morning on the Sunday, but when I got home I spoke with my wife and she wasn’t really sure about it (the coronavirus situation) as well as myself, so we both decided – before the UK Government decided to close the borders – to go back,” Van Gerwen told Sky Sports News.

“I made the right choice otherwise I could be stuck in Holland. You need to make sure you do the right things for yourself and this is the most important tournament of the year. You want to be sharp here and of course making sacrifices like that is part of your journey.”

Van Gerwen had already handed out this year’s presents to his two young children on St Nicholas’ Eve – a national holiday in the Netherlands on December 5 when ‘Sinterklaas’ brings them presents.

‘The Green Machine’ may not have hit tip-top form so far this year with 16-time world champion Phil Taylor questioning his hunger, but all Van Gerwen is thinking about his facing his next opponent, ‘Rapid’ Ricky Evans in the third round on Sunday, December 27.

“On Christmas Day we have a meal together, but the rest of the time it’s just darts. But that’s the same every year,” said the Dutchman.

“This is the first year with my son’s Christmas, so that’s a bit different. But what can you do? I’m a professional so I know what to do to win titles.

“I’m stuck in my room this year. Luckily, I have enough space and I have a few bits and bobs to make sure I’m comfortable. I’ll probably go and practice and prepare myself for my third-round match so the only thing I can think about is preparing myself for that.

“My good friend Vincent van der Voort is in the room next to me and we have a connecting door so we share a lot of time together. That makes things a bit easier for yourself. On the 26th, we’re going to have our third (coronavirus) test but the only thing that counts for me is this world championship.

“My family are used to not having me around over Christmas and New Year’s Eve.”

Sunday at the World Championship

I know I’m able to and I know I’m going to win the title because you have to believe in yourself. You have to focus and be positive.

Van Gerwen produced the performance of the tournament so far, averaging 108.98 in a 3-1 defeat of Murray.

The top seed didn’t have it all his own way as an impressive Murray missed a dart to take the contest to a deciding set having kept pace with Van Gerwen in spells.

“I felt good with my preparation and I know Ryan is a very good player and you know it’s the start of the Worlds so you always want to do something extra,” he said. “If you’re able to do that it’s a massive plus for yourself and you have to make sure you keep doing the right thing for the next round.

“It’s a long tournament with a gap in between so you need to make sure you make the most of it.

“You always need to think you can do better. It was only the second round, it’s only one game of darts, so you need to make sure you keep your feet on the ground and do exactly the same for the next round.”

Van Gerwen, who claimed the Players Championship Finals title last month, continued: “I know that when I’ve started previous Worlds in good form, I usually continue my good form. That’s exactly what I want to do now as well, despite playing under different circumstances, no crowd, and different preparations because I’ve not been home.

“You have to make adjustments but that’s also part of being a pro so you have to be flexible. The most important thing now is to keep my mind cool and to make sure I have to do it in the next round. I’ve won nothing yet.”

Van Gerwen, who is chasing a fourth world title, says he is ready to hold aloft the Sid Waddell Trophy once again after losing to Peter Wright in last year’s final.

“I have the ability, I’ve got the right mind-set and now I need to make sure I do it under these circumstances and on this stage,” he said.

“I know I’m able to and I know I’m going to win the title because you have to believe in yourself. You have to focus and be positive.”

You won’t miss a dart thanks to the dedicated Sky Sports Darts channel all the way until January 4 with every session from the World Darts Championship, including the final on Sunday, January 3. Check out daily Darts news on skysports.com/darts, our app for mobile devices and our Twitter account @skysportsdarts