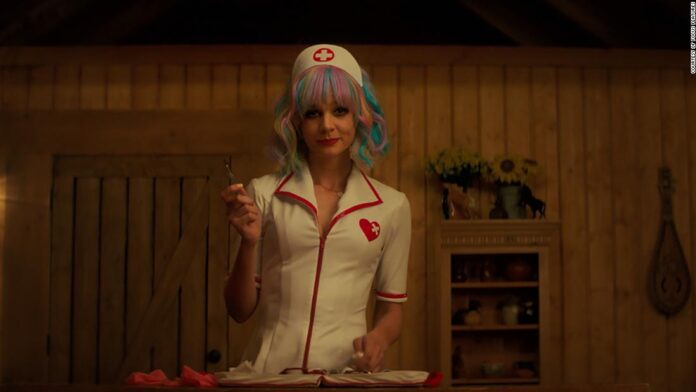 Mulligan’s Cassie gets introduced in a bar, looking very much inebriated when a male patron offers to help her get home. Her appearance, however, is actually an elaborate ruse, one designed to reel in men and dispense bracing wake-up call in the process.
What motivates Cassie, and what has her commitment to pursuing this crusade done to her once-promising life? That’s the underlying mystery in writer-director Emerald Fennell’s movie. Nearing 30, Cassie is working as a barista, hardly the life that her concerned parents (Jennifer Coolidge and Clancy Brown) envisioned before her attitude and outlook abruptly changed.
Cassie also reconnects with some old classmates –nplayed by Bo Burnham and Alison Brie — pointing toward a particular end game that she has in mind. It also offers the prospect of finding options that might divert her perilous path, which recalls the old saw about the toll of devoting one’s life to vengeance.
It’s worth noting that “Promising Young Woman” is only the latest movie to explore such themes since the wave of #MeToo coverage that swept through media, with this year’s “The Assistant” representing a more head-on exploration of powerful men abusing their status.
The unsettling focus here, rather, involves the terrible things that seemingly ordinary guys can do when they think no one’s looking and that they can get away with it — with Cassie forcing them not only to see the victim, but to look in a harsh mirror and see themselves as predators.
Mulligan (whose credits include “An Education” and “Mudbound”) improbably makes the character work as a sort-of Harley Quinn-type superhero, creating a queasy sense of tension and menace. Cassie possesses little patience for men who fall back on the “But I was younger then” defense, with the question being whether she’s descended too far down this undercover rabbit hole to get back out.
It’s a movie that will likely leave people thinking — a talker, as they say — and that’s all to the good. The reservations come down to tone and consistency in the mix of darkness and humor, and a flawed ending that nevertheless shouldn’t be spoiled.
Those complaints aside, the film is worth seeing as an impressive feature directing debut by Fennell (the versatile actress-writer-director has worked on “Killing Eve” and currently co-stars in “The Crown”), for the important conversation the subject matter invites and Mulligan’s raw intensity, which could make waves in this year’s topsy-turvy awards race.
Yet for all the movie has going for it, “Promising Young Woman” doesn’t live up to its promise. That’s a common problem with such an exercise when you don’t quite stick the landing.
“Promising Young Woman” premieres Dec. 25 in theaters. It’s rated R.