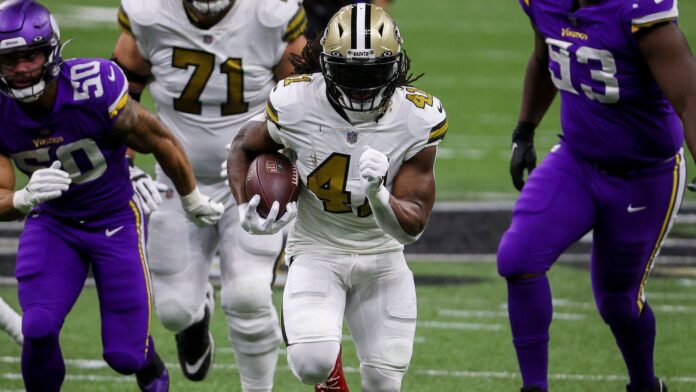 Week 16 continues on Saturday with all three games on Sky Sports NFL with Tampa Bay @ Detroit from 6pm, followed by San Francisco @ Arizona (9.30pm) and Miami @ Las Vegas (1.15am)

Victory ensured the Saints won their fourth successive NFC South title and remain hot on the heels of Green Bay in the hunt for the Conference top seed spot that will bring will it a bye in the first week of the playoffs. The Vikings (6-9) are officially eliminated from contention for the postseason and to add insult to injury the 55 points conceded is the most by the franchise since 1963.

As well as his record breaking haul of six touchdowns, Kamara finished with a career-high 155 yards rushing, scoring the first and last scores of a memorable Christmas Day contest that also mean for the first time in NFL history a game had been played on every day of the week.

Kamara sprinted for a 40-yard touchdown on the game’s opening drive and added scoring runs of 1, 5, 6, 7 and 3 yards against a Minnesota defensive front hit hard by injuries – none of the Saints seven touchdowns came via the arm of Drew Brees.

“Today was a great day, we got out first goal, division title – gonna take it from there,” Kamara said after the game.

The Saints (11-4) never punted, and set a record of yards gained in a game by a Vikings opponent with 583 – 264 on the ground and might have won by a greater margin if not for a pair interceptions off Brees, one of them on a pass that deflected off receiver Emmanuel Sanders’ hands.

Brees completed 19 of 26 throws for 311 yards in his second game back from rib and lung injuries that had sidelined him for four games, while Sanders had four catches for 83 yards and tight end Jared Cook caught three passes for 82 yards.

New Orleans’ 264 yards rushing were the most by a Vikings opponent in head coach Mike Zimmer’s seven seasons.

Positives were in short supply for Minnesota, but second-year tight end and New Orleans native Irv Smith Jr. caught a pair of touchdown passes in the third quarter for the Vikings, the second pulling Minnesota to within four points at 31-27.

However that was as good as it got for the visitors as the Saints responded with two short touchdown runs by Kamara and one by reserve QB Taysom Hill in the fourth quarter to put the game out of reach.

Kirk Cousins passed for 283 yards and three touchdowns for the Vikings, who never led and trailed for good after Kamara’s second TD in the first quarter.

Up Next – Both teams play their final game of the season next Sunday with the Vikings out to end a disappointing campaign on a high when they travel to NFC North rivals Detroit, while the Saints are also in divisional action when they face Carolina in Charlotte.