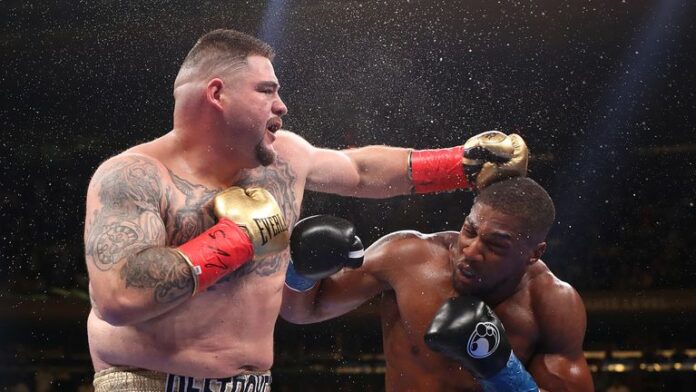 Luis Ortiz’s manager on Anthony Joshua offer: “He was upset, he wanted the AJ fight, we just couldn’t come to an agreement.” Britain’s unified champion instead lost to Andy Ruiz Jr on his US debut

Anthony Joshua wanted to make his US debut against Luis Ortiz, who was upset after a “misunderstanding” prevented the fight, says the Cuban’s manager Jay Jimenez.

Britain’s unified heavyweight champion had selected Ortiz as his first choice to replace Jarrell Miller, who was ruled out of Joshua’s world title defence after failing a drug test.

But Ortiz’s team rejected the deal in a social media post, prompting an angry reaction from promoter Eddie Hearn, and Jimenez admits his fighter had been eager to fight Joshua in New York on June 1.

He told Sky Sports: “It’s not a regret, it was a misunderstanding. Back and forth with me in the middle, then we had the promoters, we had the other side pulling for the (Deontay) Wilder fight.

“Luis obviously is a fighter. All fighters, they’re not scared to fight anyone. He was upset, he wanted the AJ fight, we just couldn’t come to an agreement.”

Andy Ruiz Jr instead stepped in at short notice to challenge Joshua and pulled off a stunning seventh-round stoppage win in New York.

Jimenez said: “We definitely watched it (Andy Ruiz Jr’s win), and if you’re a boxing fan you would think, ‘Oh, Luis would have beat him too.’

“Do we regret it? Yeah, if it would have gone that way, but that doesn’t necessarily mean it would have. Anything can happen.

“I don’t think Eddie really would have gave us the fight anyway. It wasn’t a smart decision to step into a southpaw in a month. Not a southpaw like Luis. A bigger, stronger southpaw.

“No regrets, it happened, and the right guy won that day, because maybe if it was someone else, he wouldn’t have beaten Joshua. Joshua is just so skilled, so big. No regrets, hopefully we get another shot.”

Joshua regained his world heavyweight titles by defeating Ruiz Jr on points in a rematch last December, then recently retained his belts with a ninth-round knockout of Kubrat Pulev.

Ortiz has been linked with a possible fight against Dillian Whyte next year, a potential opportunity to stake a claim for the Joshua fight.

“If we could make the Dillian Whyte fight, I think that would be a great stepping stone, especially in the UK market,” said Jimenez.

“Dillian Whyte is no walkover, he’s no stepping stone, but if that fight were to happen and Luis could come out victorious, I think we do deserve a Joshua fight.”