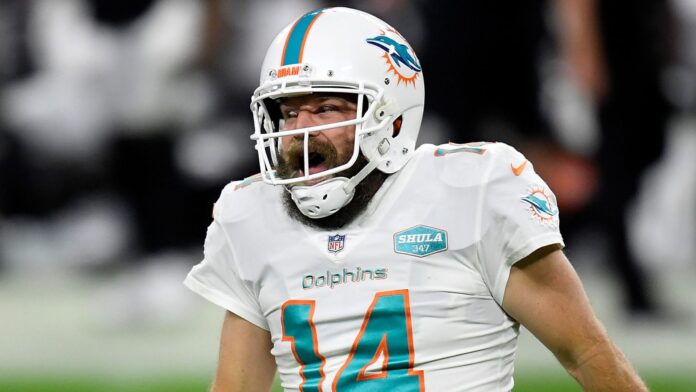 Miami Dolphins starting quarterback Tua Tagovailoa finishes 17 of 22 passing, for 94 yards and one touchdown before being replaced by Ryan Fitzpatrick, who then leads the team to victory late in the fourth quarter

The Miami Dolphins moved one step closer to an AFC playoff berth after a Jason Sanders 44-yard field goal with one second second remaining gave them a 26-25 victory over a stunned Las Vegas Raiders team on Saturday night.

​​​​​The Raiders seemed to have clinched victory when Daniel Carlson was successful with a 22-yard field goal of his own with 19 seconds left. But back came the Dolphins, as Ryan Fitzpatrick – who replaced Tua Tagovailoa at quarterback in the fourth quarter – completed a 41-yard pass to Mack Hollins, while being dragged down by the facemask to earn an extra 15, setting up Sanders’ game-winning kick.

With the win, Miami (10-5) move a half-game ahead of the Baltimore Ravens (9-5) – who face the New York Giants on Sunday – in the AFC playoff race and can clinch a Wild Card spot with a win next weekend at the AFC East leading Buffalo Bills.

The Raiders (7-8), meanwhile, were eliminated from postseason contention with their fifth loss in six games and will sit out January football for the 17th time in the past 18 seasons.

A cagey affair for more than three quarters, the game suddenly exploded into life with the introduction of Fitzpatrick for the largely ineffective Tua (17 of 22 passing, 94 yards, one TD). With the Dolphins trailing 16-13 when he came in, Fitzpatrick immediately led them down to the Las Vegas four-yard line though they’d ultimately have to settle for a field goal to tie the game up with four minutes left.

The Raiders took little time to answer. A holding penalty on first down put them in a hole, but Derek Carr got them out of it when he scrambled away from pressure despite an injured groin and launched a deep pass to Nelson Agholor, who raced away to the endzone for the 85-yard score.

The touchdown put the Raiders up 22-16, with Carlson missing what proved to be a crucial extra point, and within a minute Miami had a one-point lead when Fitzpatrick and Myles Gaskin combined for their own big-play TD – a 59-yard catch and run.

Back came the Raiders. Carr again looked deep for Agholor, and though this time he failed to connect with his receiver, a pass interference call on Byron Jones set the home side up at the 22-yard line.

They chose to run down the clock for a go-ahead field goal instead of trying for a touchdown, with Josh Jacobs even going down on purpose at the one-yard line and Carr taking a knee to set up what looked to be Carlson’s game-winning field goal.

But, with 19 seconds left, the Dolphins had some more late-game magic as Fitzpatrick hit Hollins with the deep ball, while also being dragged down by the facemask by Arden Key. The pass and the penalty moved the ball down to the Las Vegas 26, setting up Sanders’ dramatic winning kick.