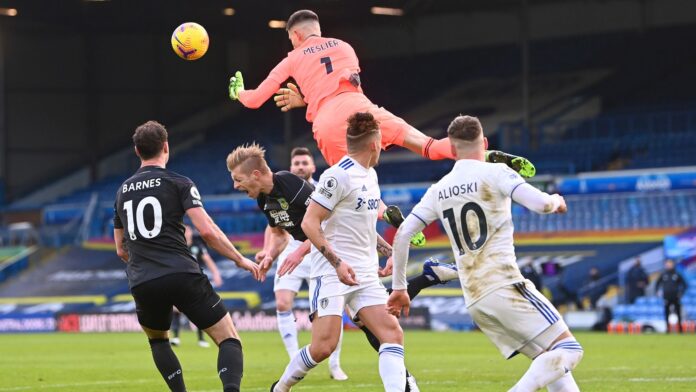 Patrick Bamford’s fifth-minute penalty was enough to see Leeds move up to 11th in the Premier League with a 1-0 victory over Burnley at Elland Road.

The hosts made the perfect start when Bamford fired home from the penalty spot for his 10th goal of the season after being brought down in the penalty area by goalkeeper Nick Pope.

Burnley, who controversially had an Ashley Barnes strike ruled out for an adjudged foul from Ben Mee on Leeds goalkeeper Illan Meslier in the first half, came on strong in the second half as they went in search of an equaliser, but they found no way through as Marcelo Bielsa’s side, who missed plenty of first-half chances, held firm for a valuable three points.

How Leeds edged past Burnley…

Leeds made a fast start and Burnley were caught out by a simple ball over the top from Luke Ayling. Bamford raced in behind James Tarkowski and Mee to get a touch to the ball ahead of Pope, who brought him down.

Man of the match: Kalvin Phillips

Bamford picked himself up to emphatically convert the spot-kick for his 10th goal of the season.

Leeds were causing the Burnley defence all sorts of problems with Tarkowski and Mee making plenty of uncharacteristic mistakes, but the hosts couldn’t capitalise as Rodrigo’s shot was easily saved by Pope before an unmarked Raphinha headed over the crossbar.

Burnley thought they should have been level in the 19th minute. However, referee Robert Jones controversially ruled out Ashley Barnes’ strike for an apparent foul from Mee on goalkeeper Illan Meslier.

The goalkeeper clatters into Ben Mee. I don’t think he fouls the goalkeeper at all. I think Leeds are mightily fortunate.

Leeds then had further chances to extend their lead but Harrison’s goalbound shot struck Bamford before Raphinha’s first-time shot was easily saved by Pope, while Chris Wood’s header failed to hit the target after the striker was picked out by Ashley Westwood.

Burnley took the game to Leeds after the restart as Matthew Lowton and Josh Brownhill forced Meslier into routine saves.

Bielsa was forced into action as he sent on Pablo Hernandez for Rodrigo and Jamie Shackleton for Mateusz Klich in a bid to get his side going again, but Sean Dyche’s side were the team looking the most likely.

Leeds should have put the game to bed when Pope brilliantly denied Hernandez after a swift counter from the home side, but it proved to be a nervy finish for Bielsa and his side.

Dyche sent on Jay Rodriguez and Dale Stephens for Erik Pieters and Josh Benson with Burnley chasing an equaliser and Rodriguez fired over at the far post after being picked out by Brownhill.

Meslier then had to be at his very best to produce a fine save to keep out Barnes’ stinging effort as Leeds stood firm amid a number of late Burnley set-pieces.

Leeds boss Marcelo Bielsa: “It was very difficult. Burnley could have drawn the game in the second half, they were two different halves. In the first we were able to impose our game, in the second, especially in the last part, it was difficult for us to neutralise their strengths.

“The first half went according to how we want to play. In the second we couldn’t avoid playing the way Burnley wanted to play. If they had drawn, it wouldn’t have been unjust. But I value the effort we put in to avoid them drawing.

“I sincerely feel there has been an evolution in the way we defend set-pieces. It was a necessity for us, I express it as a big effort we put in because in the second half when we couldn’t impose ourselves and Burnley dominated for a large period, we had the character to fight.”

Burnley boss Sean Dyche: “I can’t see the penalty for Leeds myself, Nick Pope gets a clear foot on it. Football is in an odd place. The one at the other end where we had a goal disallowed, it’s not a foul, it can’t be a foul. Ben Mee has his eyes on the ball.

“I have no clue where the game is at physically now. The lucky thing is everyone will see it, that’s a bizarre incident. That can’t be in the game. It should be a penalty for us – you can’t run and knee someone in the back. I’m very aggrieved by that, those moments are important.

“I merely asked the referee what time he would like me in, that’s it. He didn’t answer me. I will be going in to ask him what he thought. There’s not many people who agree that the game needs tidying up so at times you are a lone voice.”

Should Barnes’ strike have been ruled out?

“I don’t blame Dyche [for being frustrated]. I’d be so frustrated if I was a manager. The mistake Robert Jones makes is he blows the whistle too quickly. Sometimes you’ve got to let it breathe. The goalkeeper comes in and just takes him out. His left knee goes into the back of Mee.

“When we think about how much the game has become sanitized, we talk about players jumping with their arms up in the air, but for some reason, when a goalkeeper decides to come in and put a knee in the back of a player, we let that go.

Sincerely I don’t know whether the calls were correct or not. I just accept the decisions of the referees. As you ask the question, it seems we have benefitted from the decision.

“It’s a brilliant finish from Barnes as well, and, for me, it’s the other way around if anything. The goalkeeper has fouled Mee. The referee needs to let it go, and then make a decision.

“Robert Jones got it wrong. It’s very early into his Premier League career, but if he had his time again, he’d have just took a breath before making his decision because no doubt, it should’ve gone the other way.”

Ben Mee: “I don’t know how it’s a foul against me. If anything, don’t give anything – it’s more of a penalty than a free-kick. Barnsey put in a good finish, but I don’t know what he (the referee) was doing.”

Ashley Barnes: “The keeper tried to smash Ben Mee, missed the ball and I put it in. I don’t know why it was ruled out. There were so many decisions all day, it’s frustrating.”

Patrick Bamford: “There were lots of fouls that could’ve gone either way for both teams. As a team they [Burnley] were screaming for everything and that influences a referee, sometimes not in a positive way. I thought the referee did his job and I thought he had an alright game.”

Man of the match – Kalvin Phillips

Moved to the heart of Leeds’ leaky defence, Phillips produced an excellent performance against a physical Burnley side as the hosts picked up a first clean sheet in over a month.

Leeds boss Marcelo Bielsa on Phillips’ performance: “Phillips is player with a big capacity to adapt to playing in different positions on the pitch and the times showed he has had to play as a CB in the back three, every time he has done this he has had good responses and he did today.”

🎯 The Clarets did have 6 attempts on target v Leeds, their most in a PL match this season pic.twitter.com/Qmh0RPM1ar