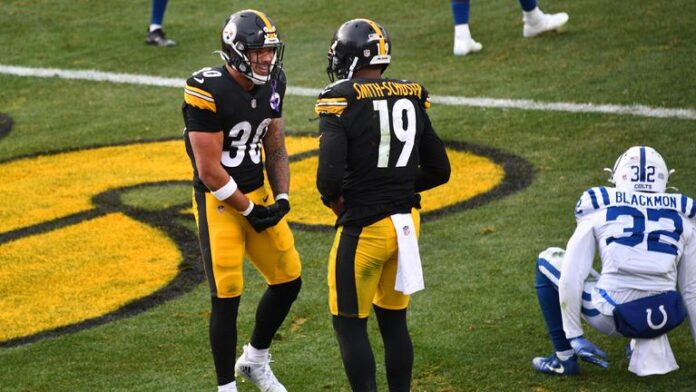 The Steelers win for the first time in four matches to be crowned AFC North division winners, but only after hitting back from 24-7 down to snatch a 28-24 victory over the Colts

Pittsburgh Steelers produced a late comeback worthy of their new status as AFC North champions as they snapped their losing streak against in-form Indianapolis Colts at Heinz Field.

The Colts led 24-7 after dominating the first hour of the contest before a spectacular grab from Diontae Johnson sparked the late rally, in which Ben Roethlisberger also connected with Eric Ebron and JuJu Smith-Schuster for touchdowns.

Colts quarterback Philip Rivers did manage to draw level with Dan Marino after throwing his 420th touchdown pass before half-time, but he threw a crucial late interception and was sacked five times to leave them facing a nervy final week of the regular season.

The Steelers were eyeing up the chance to join the ’72 Dolphins in unbeaten immortality territory early this month, but they appeared set to become the first team in NFL history to start a season 11-0 and then lose their next four games.

The opening drives were hugely contrasting, Roethlisberger firing and missing for a quick three-and-out before Philip Rivers drove the visitors 70 yards in nine plays, capped by Jonathan Taylor pounding his way over from six yards for the opening score.

Rivers then fumbled for the first time in 871 offensive snaps under pressure from the intimidating TJ Watt, and James Connor’s short touchdown run levelled the contest following a crucial offside penalty against the Colts on third down.

But Rivers atoned for his error on the next possession, engineering an 85-yard scoring drive in 12 plays which was again wrapped up with a close-range run from Taylor, and a precision pass from Rivers was collected by Zach Pascal for a 42-yard touchdown on their following drive.

The Steelers, likely to have heard a few choice words from Mike Tomlin during the interval, appeared set to respond immediately after Rodrigo Blankenship’s chip-shot had made it 24-7, but they failed to convert four attempts from a first-and-goal at the four-yard line.

However, the inspiration that Pittsburgh needed was not long in coming as Roethlisberger’s floated pass was met with a stunning, diving catch from Johnson which would have had the “terrible towels” waving in their thousands had fans been permitted into the stadium.

And after the Colts’ next drive was reduced to three plays and a punt, Roethlisberger found tight end Ebron in the end zone from five yards to ensure the Steelers had all the momentum in their favour entering the final 15 minutes.

The banged-up Indianapolis offensive line again looked vulnerable as Rivers took some further punishment, while fellow veteran Roethlisberger looked rejuvenated and fired the hosts into the lead for the first time in the game with a delightful 25-yard scoring pass to Smith-Schuster.

A battered and bruised Rivers was then picked off by Mike Hilton, and the Colts final chance to snatch their fourth consecutive win ended with a turnover on downs as the Steelers celebrated their first victory since edging out AFC rivals Baltimore on December 2.