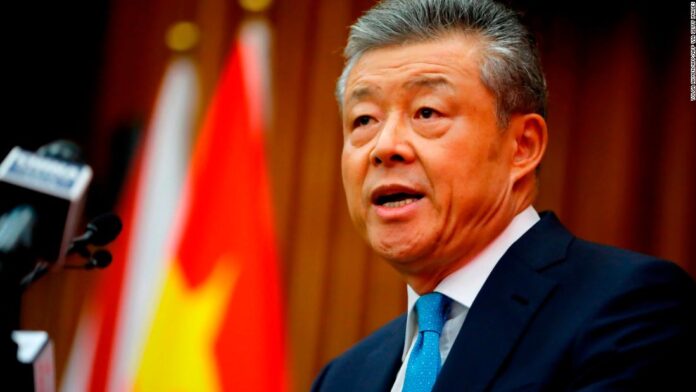 Liu Xiaoming, the current Chinese envoy to the United Kingdom, will leave his post in the near future, Tam Yiu-chung, a delegate to the National People’s Congress Standing Committee confirmed to CNN. At 64, Liu is a few years off the unofficial retirement age for senior Communist Party members of 68, though well above the legal retirement age of 60. The South China Morning Post first reported Liu’s plans Sunday.
China’s Ministry of Foreign Affairs and the country’s embassy in the UK did not respond to a request for comment.
According to Tam, Liu’s replacement will be Zheng Zeguang, 57, a current vice foreign minister who previously served as a senior diplomat in the United States. Liu also worked in the US for many years before becoming ambassador to the UK in 2009, a post he has held since.
In that position, Liu has emerged as one of the most prominent defenders of Beijing on the global stage, taking on a public-facing role that was once rare for Chinese diplomats.
In many ways, Liu helped set the mold for what are now known as China’s “wolf warriors” — a term once embraced by Chinese state media but now rejected by Beijing. It has come to describe the type of combative, nationalist officials who readily engage with foreign critics online and in the media.
“We never pick a fight or bully others. But we have principles and guts. We will push back against any deliberate insult, resolutely defend our national honor and dignity, and we will refute all groundless slander with facts,” Chinese Foreign Minister Wang Yi said earlier this year, responding to a question about the country’s approach to diplomacy.

In 2014, Liu attracted controversy when he blasted a visit by then Japanese Prime Minister Shinzo Abe to a controversial World War II shrine, using an analogy involving the villain from the Harry Potter series.
“If militarism is like the haunting Voldemort of Japan, the Yasukuni Shrine in Tokyo is a kind of horcrux, representing the darkest parts of that nation’s soul,” Liu wrote, in an op-ed praising the UK and China’s alliance during that war.
That was during the so-called “golden era” of relations between London and Beijing, during which Liu oversaw a state visit by Chinese President Xi Jinping to the UK.
Relations have soured since, however, as the UK has taken a tough line in regard to Beijing’s actions in Hong Kong and Xinjiang, and restricted Chinese telecoms giant Huawei over espionage fears.
In June, Liu appeared on the BBC to defend China’s policies in Xinjiang, the far-western region where Beijing has detained an estimated 2 million Uyghurs and other Muslim minorities in “re-education camps.” Confronted with credible accusations of forced sterilization of Uyghur women, mass interment, and other alleged human rights abuses, Liu told the broadcaster these could be “easily refuted.”
“This is not true. The fact just shows the opposite. People in Xinjiang enjoy happy life. They call for order to be restored in Xinjiang,” he said.
In the same interview, he also defended Beijing’s recent imposition of a sweeping national security law on Hong Kong, which criminalized secession, subversion and foreign interference in the former British colony. Throughout his career, Liu pushed back hard against attempts by London to speak out for democracy in Hong Kong and complaints that Beijing wasn’t sticking to the principles of the agreement governing the city’s handover to Chinese rule.
During major anti-government protests in Hong Kong last year, Liu was summoned by London over “unacceptable and inaccurate” comments accusing the UK of interfering in the city’s affairs and encouraging the unrest. He also inveighed against London for banning Chinese telecoms giant Huawei, warning earlier this year that the way the UK treated the telecoms giant “will be followed very closely by other Chinese businesses.”

While Liu’s comments won him few fans in London, they were well received at home. For example, the nationalist state-run tabloid Global Times praised Liu for exposing “Western media fake news” on Xinjiang and other issues.
Liu has been one of the more active Chinese diplomats on Twitter, where he has more than 103,000 followers and tweets regularly on both Chinese and British politics. The platform has also caused him problems however: in September, Liu’s profile “liked” a pornographic tweet as well as one criticizing the Communist Party, leading many to speculate his Twitter account had been hacked.
More recently, he used the platform last week to congratulate the UK and European Union on a post-Brexit deal, which Liu described as a “wonderful Christmas gift!”
The fallout from Brexit will likely dominate the agenda of whomever succeeds Liu, whether Zheng or another candidate.
China had been seen by many as a potential major market for the UK to expand into once it leaves the EU, but recent diplomatic spats have thrown this into doubt. The UK will also have to face dealing with Beijing from a position of considerably-denuded strength, compared to its role within the EU, one of the world’s largest trading blocs.
Relations between the UK and China seem unlikely to improve in the short term either, with London poised to begin welcoming potentially hundreds of thousands of Hong Kongers under a new immigration scheme announced in response to Beijing’s imposition of the national security law.
In August, Liu denounced the move and said the UK “will bear the consequences of treating China as a hostile country.”