Home World Sorry, but video meetings are here to stay 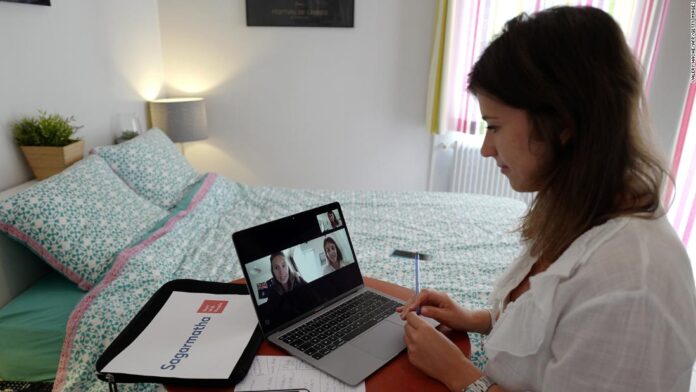 “I am someone who thrives off of social in-person interaction, he said. “White-boarding sessions, brainstorming sessions, being able to tap on a neighbor’s shoulder if you have a question and overall, just being able to see and meet new faces.”
Penn, 27, who works at San Francisco-based cloud communications firm Twilio, initially struggled to replicate those interactions in a virtual setting but has gotten a little more comfortable with them over the last few months. Still, he is ready to go back into the office — if not every day, then at least a few times a week.
“But I do have to say: I am so tired of Zoom,” he said. “Like, Zoom fatigue is real. It’s a real thing.”
Zoom and its peers have had a banner year, becoming integral parts of our professional and personal lives, but working professionals are split on how much they want to continue leaning on these services once the pandemic ends.
After a year that saw Zoom become a verb for countless households who turned to it for work conferences, birthday parties, first dates and more, some like Penn would prefer to get back to limiting their video interactions to the occasional FaceTime call.
They may not get their wish.
“While there certainly could be a dip, video conferencing and virtual collaboration is here to stay,” Michael Inouye, Video & OTT Principal Analyst at global tech market advisory ABI Research, told CNN Business.

To understand why video conferences aren’t going anywhere, you might start with Dhwani Dalal. The 29-year-old, who works at an e-commerce marketing startup in New York, got a taste of the telecommuting life during the pandemic and doesn’t want to give it up.
“[I] basically never want to go back,” she said. “It was always the grind, 6 a.m. to 7 p.m., hustle and repeat…Now I have the space to actually have a schedule that I want.”
Having all her colleagues a video call away has, in fact, allowed her to get to know more of them. “I’ve connected and built relationships with coworkers I probably would’ve never had to speak to had I been in the office,” she added.
Businesses are now starting to adapt to the expectations of employees like Dalal.
Several companies, particularly large tech firms, have already announced support for workers moving to other cities and working remotely. Twitter announced earlier this year that it would give employees the option of working remotely forever, while Facebook CEO Mark Zuckerberg estimates 50% of his company’s workforce could be working remotely by 2030.
More traditional firms are also moving in a similar direction. Deutsche Bank employees will be working from home until at least July 2021, and French automaker PSA, which owns Peugeot, Citroén and Vauxhall, said all its non-production staff will work remotely from now on.
Dimitri Dadiomov, cofounder of Bay Area payment software startup Modern Treasury, says much of his workforce is already remote, with 18 employees spread across nine US cities.
“When the time is right, we’ll open up an office, but we’ll support both in-office and remote workers and continue hiring remote as well,” Dadiomov told CNN Business.
Firms that were once reluctant to let their employees work remotely, or worried about potential security issues from using cloud-based services, have now been forced to do so and learned that it’s not as bad as they imagined, Inouye said.
Even for the workers who do choose to head back into their offices, having at least some colleagues continue to work remotely means meetings will still have a video component.

The Zoom boom isn’t just about work calls and meetings, though. The majority of our personal interactions and gatherings — Thanksgiving dinners, happy hours, casual catchups with friends — have been forced to be done via video this year.
The constant screen time can get exhausting and has birthed the phrase Penn used to describe how he feels: Zoom fatigue.
Many of the conversations that would previously take place in an impromptu chat between coworkers or an informal huddle at the office now have to be scheduled in addition to meetings.
“Zoom is not accidental, you have to be intentional if you use it,” said Jeffrey Hall, a professor of communication studies at the University of Kansas and the author of the recent book Relating Through Technology. “When people say Zoom is taxing, they’re also saying: ‘I miss just being able to walk past my colleague,'” he added.
Hall says a drop-off in video calling is likely for social gatherings where there’s really no substitute for getting together in the flesh.
“I actually expect it to go down to a very, very low frequency behavior and the reason is I don’t think the pandemic was a long enough period of time to establish a sea change,” he said. “However, it could be that people have gotten comfortable with video chat in a way that they would use it at an equal level of something like the telephone.”
Dalal thinks video calls will be an integral part of her working life going forward, well after the pandemic is over.
“The idea that we needed to be in the office ten hours a day, five days a week in order to be productive — that’s been proven wrong real quick,” she said. “I think some industries were headed there anyway but this pandemic accelerated by a decade at least.”